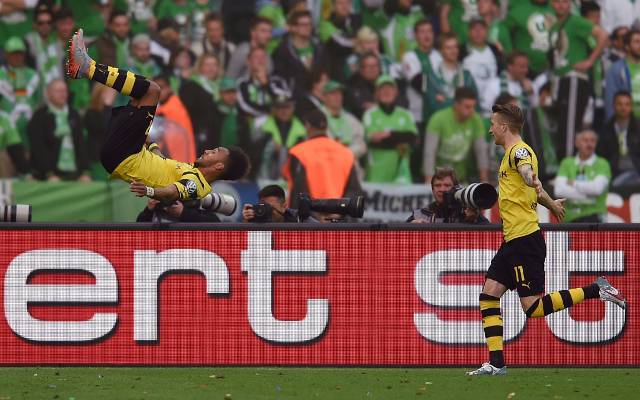 The north London side will offer €40m (£28m) for the Gabon international with Arsene Wenger having been suitably impressed by the 26-year-old’s display when Arsenal came up against Borussia Dortmund in their Champions League group stage clashes last season.

Aubameyang netted against Arsenal and scored a total of 25 goals in all competitions and could certainly offer Arsenal extra strength in the final third.

Currently Wenger elects to use Olivier Giroud as his first choice central-striking weapon though the French international has hardly proven prolific in recent seasons.

New Westfalenstadion boss Thomas Tuchel, who took over from Jurgen Klopp earlier this summer, hopes to keep hold of Aubameyang according to Bild, though the club’s failure to secure a Champions League berth could prove something of an obstacle to the club’s push to keep hold of their top talents.

Aubameyang failed to make an impact at AC Milan as a teenager and after numerous loan switches the lanky forward finally got into gear when he moved to Saint-Étienne in 2011.

Two strong seasons at the Ligue 1 side led to a move to Borussia Dortmund in July 2013 and his tally of 41 goals in 95 appearances is impressive given that Borussia Dortmund have experienced a couple of lean seasons of late.

Arsenal brought an end to a lengthy silverware drought by winning back-to-back FA Cup triumphs though Wenger will hope to now mount a genuine challenge for major honours in 2015/16 after his side’s superb run of form over the course of the second half of last term.

The North London side are close to completing the signing of Chelsea keeper Petr Cech (Via BBC Sport) and that capture would certainly aid in Arsenal’s push to secure a Premier League title.