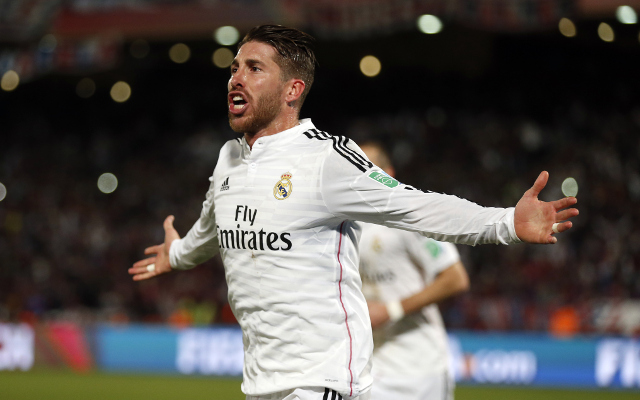 The latest revelations will fuel the whirling rumours linking the World Cup-winner with a move to Old Trafford.

The centre-back has been heavily linked with a move to Manchester this summer, and has been identified as one of Louis van Gaal’s key transfer targets for the transfer window [Telegraph].

Beyond Ramos, the likes of Nicolas Otamendi [Daily Mail], Raphael Varane [Express] and Mats Hummels [Metro] are all rumoured to be in the plans of the Dutch manager.

While the secret meeting with United officials happened two months ago, according to the Express, in recent weeks, the transfer speculation concerning the player has increased.

Ramos has added weight to the rumours linking him with a move away from the Bernabeu by apparently telling Real Madrid that he is keen to leave the club [Express]. He is understood to be keen on a move to Manchester and to England, and has begun taking English language lessons in potential preparation for a move [Mirror].

Ramos’s father is also believed to be a United fan [Daily Mail].

The defender is understood to feel disrespected by the Merengues, and is unhappy with the way the club’s hierarchy have responded to his contract requests [Independent].

There is some indication that Rafael Benitez is open to cashing in on the world-class defender, who can play as a centre-back or a right-back. The Blancos’ fierce rivals Barcelona revealed that they had been offered Ramos—a major sign that the player’s future in the Spanish capital is in doubt [ESPN].

The Independent understand that it would take a bid of £46.5 million for Real to agree to sell one of their longest-serving stars.

The 29-year-old has enjoyed immense success during his career; he is a three-time La Liga champion, has won the Copa del Rey twice, and also lifted the Champions League—Real’s tenth—in 2014.

With the national side, he lifted two European Championships—in both 2008 and 2012—and the 2010 World Cup with La Roja.

Despite the accumulating evidence linking Ramos with a move to Old Trafford, the Express anticipate that it is unlikely the player’s switch to Manchester would be connected with a potential move taking David De Gea to the Bernabeu.