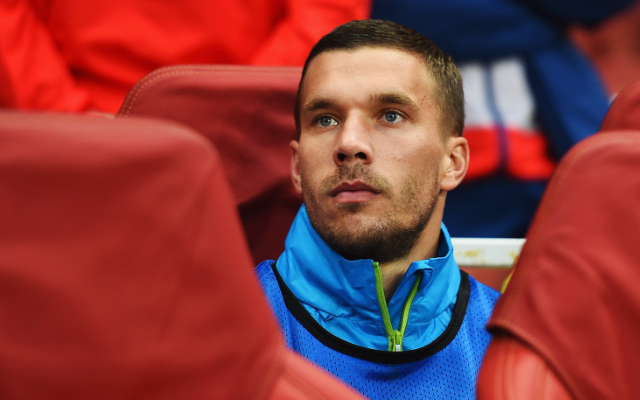 Arsenal winger Lukas Podolski has admitted that moving to Inter Milan in the winter window was a mistake, and insists that his future lies in the Premier League.

Arsene Wenger must have had considerable faith that Podolski could have been a star performer in north London in handing the Germany international the No.9 shirt; however, like many former Gunners forwards to have worn the shirt number – including Nicolas Anelka and Eduardo da Silva – the winger has suffered in England’s top flight.

The 30-year-old was sent out on loan in January – after falling out of favour with Wenger – where he scored just one Serie A goal for Roberto Mancini’s side, and doesn’t look back on his six-months at the San Siro fondly.

“Inter? Last season went how it went. English football is the one which best suits my style, but I know how suddenly everything can change,” as quoted by the Daily Star. “I have characteristics to help different teams, but it was a mistake to go to Inter with no redemption clauses.

“In football there are times when everything doesn’t work out for the best. You’re not always playing as a starter, and you just have to accept the decisions and work on your own game.

“That’s what I did, but now I’m looking forward.”

The World Cup winner has been linked with an Arsenal exit since his time in Italy came to an end, with Galatasaray said to be considering a £1.5m bid for his signature [via the Daily Mail].

With Alexis Sanchez, Theo Walcott and Alex Oxlade-Chamberlain competing for a wide role – and the possibility of new recruits – Podolski’s career at the Emirates looks almost certain to be coming to a permanent end.