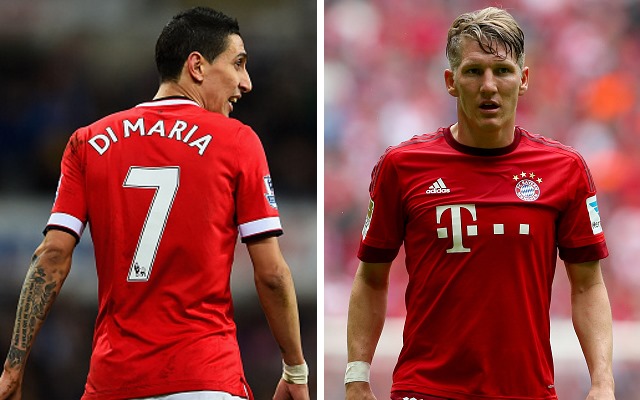 Bayern Munich are considering a player exchange for Angel Di Maria, which would see Bastian Schweinsteiger move to Manchester United.

The Red Devils have been heavily linked with a move for the 30-year-old in recent months, following Louis van Gaal’s admission that he is looking to sign another central midfielder, via the club’s official website.

BBC Sport have reported that the Premier League giants are planning a move for Schweinsteiger and are keen to tie a move up during the summer transfer window.

The World Cup winner—whose current deal comes to an end in June 2016—has reached a contract impasse with his current employers, with reports recently indicating that the Bavarian giants will not be offering the world-class midfielder an extension [Metro].

According to the Metro, Pep Guardiola sees the Red Devils’ interest in Schweinsteiger as possible leverage to acquire Angel Di Maria.

The Argentine midfielder—Schweinsteiger’s opponent in the 2014 World Cup final—moved to Old Trafford last summer in a £59.7 million deal, but didn’t completely convince in his maiden season in England.

Despite contributing 10 assists, the former Real Madrid man has been linked with a move away from the club, with both Paris Saint-Germain and Bayern linked with his signature [Independent].

Bild [via the Metro] understand that United would be willing to offload Di Maria if they can secure Schweinsteiger and a considerable transfer fee.

The Metro understand that the German midfielder would be available for £7.5 million, meaning that any swap deal for Di Maria—who cost United £59.7 million only a year ago—would likely see Bayern stumping up a considerable payment.

It remains to be seen, however, whether Schweinsteiger would agree to move to Old Trafford, particularly following advice he received from Bayern and Germany legend Franz Beckenbauer, who advised the midfielder to remain in the Bundesliga for the next two or three years [ESPN].