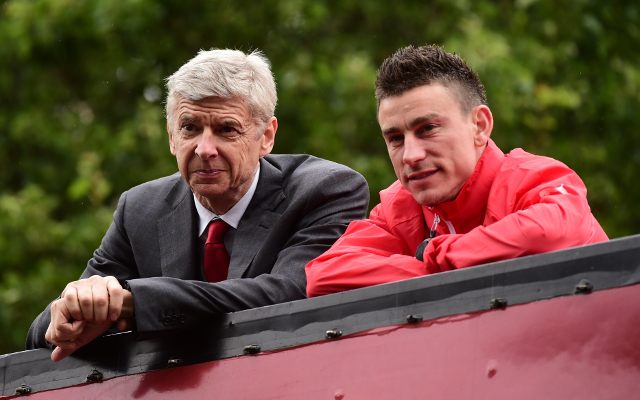 Bernabeu boss Rafa Benitez sees the experienced French international as a possible replacement for Sergio Ramos (Via Daily Express) though Arsene Wenger is sure to fight off any move for Koscielny.

The 29 year old is arguably Wenger’s most consistent defensive performer and a player who also brings out the best in centre-back partner Per Mertesacker.

Arsenal signed Koscielny from Lorient in July 2010 and he has made 201 appearances for the North London side and is a pivotal member of an Emirates Stadium side that is beginning to turn the corner.

The Gunners endured a miserable eight season silverware drought prior to their FA Cup final triumph over Hull City in 2014 and Wenger’s side retained the trophy last month and will look to push on with efforts to mount a genuine Premier League title push in 2015/16 and can not afford to lose their star performers.

Benitez is keen to keep hold of Raphael Varane according to France Football and may be looking to pair the two Frenchman together at the heart of his Real Madrid defence.

Real Madrid struggled defensively last term, conceding more goals than any other side in the top five in La Liga, and should Ramos leave then Benitez would find himself with a big hole to fill.

Rafa Benitez was appointed Real Madrid boss earlier this month and will be looking to steer the Spanish giants back on track after a poor campaign last term, which ultimately cost Carlo Ancelotti his job.