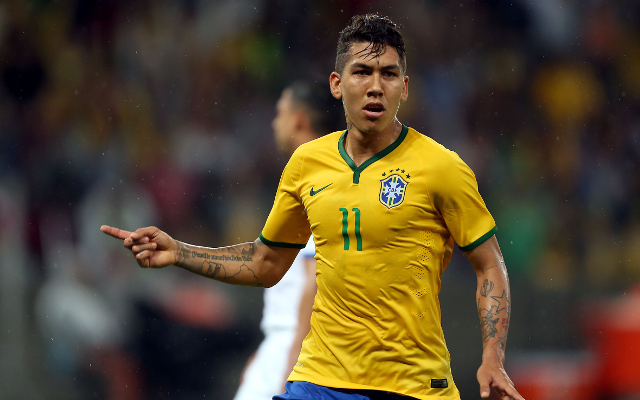 Liverpool announced the signing of Roberto Firmino in a £29 million deal from 1899 Hoffenheim on Wednesday, and excitement has certainly hit Merseyside as Brendan Rodgers secures his first blockbuster transfer addition of the summer window.

Subject to a medical once his participation in the Copa America tournament comes to a end, the Brazil international’s Premier League arrival will be confirmed [via Liverpool.com].

However, is Firmino an upgrade on Raheem Sterling-the Reds’ wantaway star-or is he simply a poor man’s version of the Manchester City target?

Excitingly for Reds fans, Liverpool have signed the most creative player in the Bundesliga over the past two seasons – with no other playmaker having created more than his 138 goalscoring chances [via WhoScored].

As an attacking midfielder who offers similar versatility to Sterling – having played as a central forward, left winger and central midfielder, as well as in the No.10 role over the last season, there is speculation that Firmino could be a direct replacement to the England international.

Sterling has been the subject of two rejected bids from Manchester City – the first £25 million, the second £40 million – but a third bid is expected from the Citizens which, if it meets the Reds’ £50m price tag, could be accepted [via the Liverpool Echo].

The forward’s agent Aidy Ward has confirmed that the 20-year-old will not be signing a new contract with the Anfield giants, as he looks for an escape route from Rodgers’s side [Standard].

As such, WhoScored have put together a statistical comparison of the duo, as tweeted by Sky Sports: 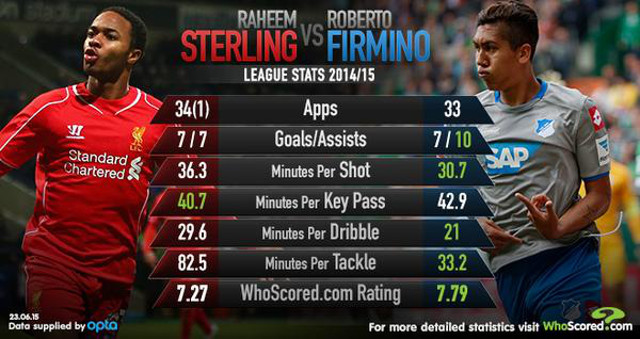 The statistics show that Firmino beat Sterling in a number of key areas last season – including assists, minutes per dribble, and minutes per tackle. He also averages a slightly better overall rating.

Moreover, while rumours are rife that the former Hoffenheim star could be replacing the Three Lions youngster; perhaps Reds supporters should be even more excited at the prospect of the Brazilian playmaker lining up alongside compatriot and last season’s PFA Player of the Year contender Philippe Coutinho.

If Daniel Sturridge – who has been ruled out of starting next season as he recovers from a hip injury [via Daily Mail] – returns to fitness not too far into the beginning of the 2015-16 campaign, Brendan Rodgers could have one of England’s most formidable attack forces, as they look to return to the top four.