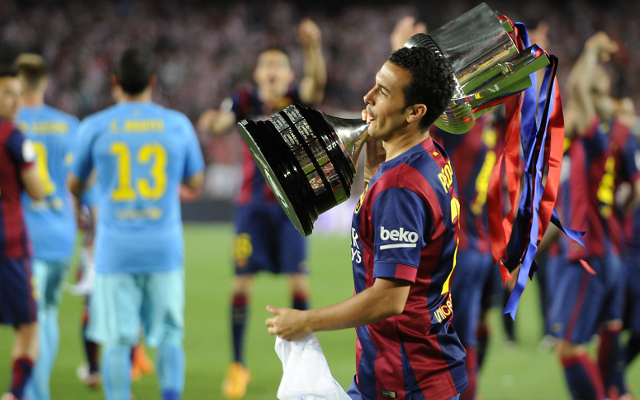 Despite renewing his Barcelona contract until 2019 at the beginning of June, Pedro Rodriguez is questioning whether signing a new deal was the correct decision – putting Liverpool and Manchester City on high alert.

The La Liga BBVA champions announced [via their official website] that the Spanish winger had committed his future until the end of the 2018-19 season, but the 27-year-old is said to have regrets over putting pen-to-paper on the new deal, Mundo Deportivo report.

According to the Spanish newspaper, Pedro remains concerned over his role in Luis Enrique’s side with Nemyar, Luis Suarez and Lionel Messi set to continue as the undisputed trio in attack. Another campaign of being a second-choice forward, along with his understanding of other clubs interest in his signature, has left him in doubt over his Barca future.

Mundo Deportivo state that Liverpool – who have already made six summer signings – could be tempted into making a bid for the forward to further strengthen their attack. Brendan Rodgers has already secured the signature of Roberto Firmino, Danny Ings and James Milner, but the Northern Irish manager may still be preparing for more business in the coming months after seeing his forward line of Daniel Sturridge, Mario Balotelli and Rickie Lambert perform so poorly last season. Meanwhile, Manchester City are also credited with interest in Pedro, along with Paris Saint-Germain and Inter Milan, the Spanish daily claim.

Pedro made just 15 starts and 20 substitute appearances in La Liga last season, scoring six goals and registering six assists. He looks set for another bench warming role with the Champions League winners in the 2015-16 campaign, as Neymar, Suarez and Messi developed a tremendous on-field relationship – netting 61 times between them last season.

However, he may have priced himself out of a transfer in signing a contract extension.

With the statement on Barca’s official website revealing a €150m release-clause this, combined with the four years now remaining on his deal, could result in his signature being too costly for potential suitors.