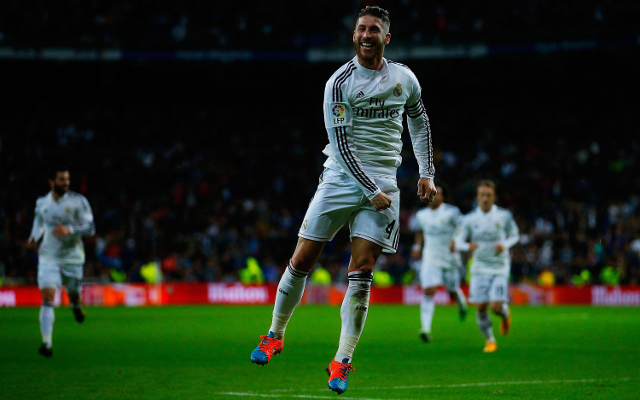 Manchester United are prepared to spend a significant amount of their €200m summer transfer budget on securing the signature of Real Madrid’s Sergio Ramos, according to reports from Spain.

Spanish newspaper AS claim that the Red Devils have promised The Meringues vice-captain a €55m salary over five-years, which means if the Spaniard swaps La Liga for the Premier League, he’ll earn a staggering €12m in his first campaign in England.

The possible long-term contract with van Gaal’s side would not only see the centre-back increase his income significantly – he currently earns €7m-per-season in Madrid – but it could see the 29-year-old end his career at Old Trafford.

Los Blancos president Florentino Perez was, according to AS, said to be unwilling to meet Ramos’ wage demands of €10m; however, the English giants appear to have no qualms in offering the cash required to secure the signature of one of Europe’s most esteemed defenders.

The former Sevilla star’s unhappiness at the Santiago Bernabeu was revealed at the weekend, with the centre-back said to be furious that Real didn’t rubbish claims from Barcelona that their fierce rivals were offered his signature at the presidential election [via AS].

Marca reported on Wednesday that Ramos had held a meeting with at Valdebebas – where the La Liga BBVA giants’ training camp is located – and the Spain international was said to confirm his desire to seal a transfer this summer, and even collected personal belongings from the ground after the meeting.