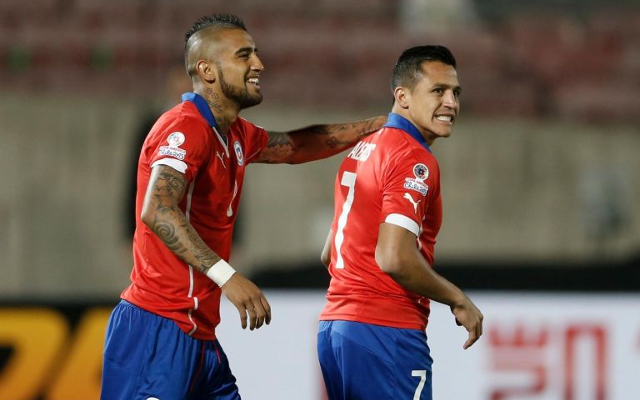 Arsenal star Alexis Sanchez is reportedly sweet talking his fellow Chilean Arturo Vidal into making the move from Juventus to the Emirates Stadium this summer, according to the Daily Star.

The pair are currently on Copa America duty together and have performed well for the host nation, with Sanchez seemingly hoping to line up alongside the midfielder in next season’s Premier League as well.

Vidal has long been regarded as one of the top central midfielders in the world, having shone as one of Juventus’ best players since he joined the club, helping them to four consecutive Serie A title wins, as well as a run to last season’s Champions League final.

Although Arsenal enjoyed some surprise form from Francis Coquelin in the defensive midfield role last season, they could clearly still do with more depth in that area, and the addition of a player of Vidal’s quality would certainly be a boost.

The Star claims the 28-year-old would cost around £21.3m, which seems a fair price and one that won’t necessarily scare off Arsenal after their recent big-spending habits, with big names like Mesut Ozil and Sanchez himself joining the club in the last two summer transfer windows.

With the Daily Mail reporting earlier this week that Arsenal had also concluded a deal to sign Chelsea goalkeeper Petr Cech, it looks like it could be a very positive summer for the Gunners, who will be hoping to build on their FA Cup success of last season and challenge for bigger trophies like the Premier League title and the Champions League.