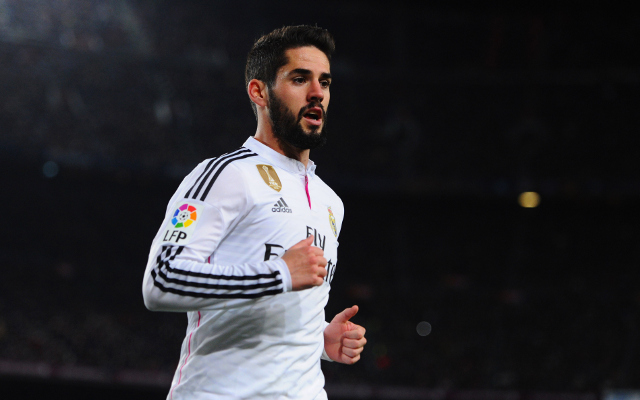 Juventus have joined Arsenal and Manchester City in the transfer chase for Real Madrid’s Isco, with the Italian giants searching for a replacement for Major League Soccer-bound Andrea Pirlo.

The Gunners have previously been credited with interest for the Santiago Bernabeu playmaker, with Arsene Wenger rumoured to have placed the 23-year-old on his summer wish list [talkSPORT].

Speculation on a move to the Premier League, however, has cooled and Serie A champions Juventus are said to have earmarked Isco as the midfielder they wish to replace Andrea Pirlo, who is heading for New York City, AS report.

Pirlo was snapped at the Yankee Stadium over the weekend-a major hint that the Italy legend was heading to MLS next season-and he could be set to join Frank Lampard in the Big Apple [Daily Mail].

BBC Sport later revealed that NYCFC were in talks with the 36-year-old, suggesting that a deal could be imminent.

The Italian midfielder remained a regular in Massimiliano Allegri’s side last season – despite nearing the age of 40 – making 29 appearances in all competitions. As a result of his expected departure, Allegri could be searching for a replacement of top-class quality.

Isco is said to be the desired successor.

The Spanish playmaker made 26 starts in La Liga in the 2014-15 campaign – scoring four goals and registering nine assists – and could be difficult to prise away from new manager Rafael Benitez. The former Liverpool boss is said to be preparing to use a 4-2-3-1 formation in his first term in Madrid, which could favour Isco. Cristiano Ronaldo is set to be deployed as a centre-forward with Gareth Bale just behind in a No.10 role [The Independent].

On 15 occasions, Isco started on the left wing last season, and with wingers Ronaldo and Bale set to play centrally, this could hand the Spaniard a regular wide position.