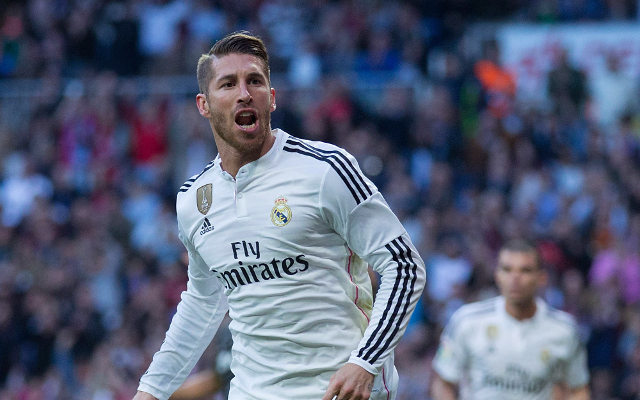 Real Madrid’s Sergio Ramos is said to be unsettled in the Spanish capital and has consequently attracted the interest of Manchester United; however, Louis van Gaal has been warned that the centre-back will only move for a significant fee.

Reports from the Daily Mail on Thursday night claimed that the La Liga BBVA giants had instantly rejected a £35 million opening bid from the Red Devils.

Spanish newspaper AS, on Friday morning, reported that the Premier League heavyweights have been informed that Ramos will only be sold if their valuation of €90 million (£64 million) is met – which would eclipse the £50 million Paris Saint-Germain paid Chelsea for David Luiz [BBC Sport], and thus could result in the Spain international becoming the most expensive defender of all time.

AS suggest that Florentino Perez may be willing to cash in on the 29-year-old in the coming months with the player wanting out – if the price tag is met – and negotiations with Manchester United are underway.

His valuation, however, will come as a blow to the Red Devils considering they were eager for a straight swap deal involving David De Gea [Daily Star].

The United’s Dutch manager is rumoured to have a transfer budget of £150 million [Express], and another busy summer at Old Trafford is expected. Reports suggest that van Gaal won’t hesitate in spending big again a year after spending £145.5 million in his first summer in England [Soccerbase].

Beyond Ramos, United have also been linked with other defensive reinforcements such as Nicolas Otamendi of Valencia [Daily Mail], Mats Hummels of Borussia Dortmund [Metro], and another Real defender, France international Raphael Varane [Express].