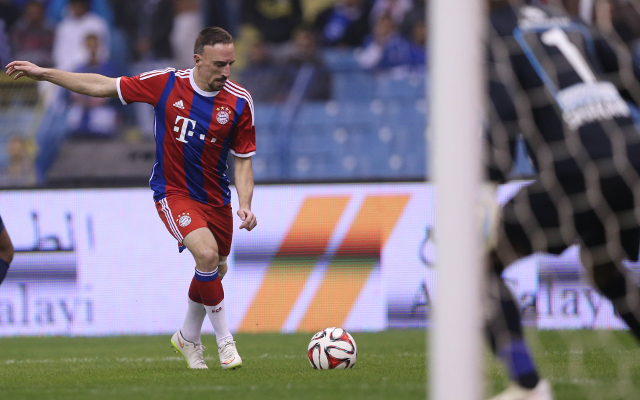 One of the best footballers in the world could be forced into hanging up his boots, according to reports in France [via Metro Sport].

Bayern Munich winger Franck Ribery is said to considering the possibility of retiring from football as he struggles to overcome a longstanding ankle injury which restricted his playing time last season.

French newspaper L’Equipe claim that the severity of Ribery’s injury is causing him to contemplate his future in the game:

“Franck has suffered too many stoppages in recent seasons, we should have counted on him in a more continued manner. But it’s clear that, statistically talking, he has missed a lot of games in recent seasons because of injuries,” Bayern Munich president Karl-Heinz Rummenigge said.

The Frenchman made just 15 appearances for Bayern last year and scored five goals en route to German giants clinching the Bundesliga title once again and his agent Jean-Pierre Bernes has rejected rumours of a potential retirement:

“Franck is not the type to give up. On the contrary: He’s desperate to return to playing and he doesn’t know when that will be, so he is worried about the situation,” Bernes said.

“He is doing everything to return and he wants to end his career in a good way, not like this,” he added.

Ribery’s last game for Bayern came in the 4-0 win over Augsburg last December, meaning he was forced to sit out the climax of the campaign and had to watch on from the sidelines as his club crashed out of the Champions League at the hands of eventual winners Barcelona.

It was only two seasons ago that Ribery was in the best form of his career as he finished third in the race for the 2013 Ballon d’Or behind Cristiano Ronaldo and Lionel Messi.