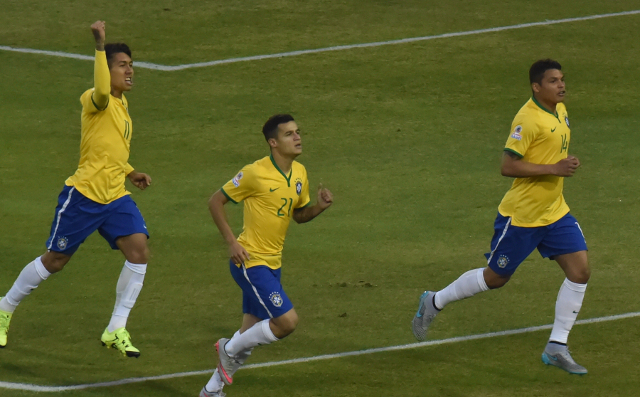 Liverpool midfielder Philippe Coutinho is relishing the prospect of playing alongside his international team-mate Roberto Firmino at club level this season.

The Brazilian duo are currently on Copa America duty in Chile, but Coutinho took time out of preparations for their quarter-final clash against Paraguay on Saturday night to speak to the club’s official website about his compatriot joining him at Anfield:

“I think it is great news. Firmino is a great player and obviously I know him from the Brazilian national team. He is a great character and person,” Coutinho said.

“He is strong physically, he is fast, agile, very skilful on the ball and he scores a lot of goals – he is a great forward. I am sure he will be of great help to us next season.”

“After hearing the news, I said to him ‘welcome to Liverpool’ and I have told him that he will be coming into a club that is like a family – I made sure to tell him that,” the Reds number 10 added.

Firmino became Liverpool’s fifth signing of the summer during the week and he will join James Milner, Danny Ings, Adam Bodgan and Joe Gomez as new arrivals on Merseyside.

The 23-year-old was in brilliant form for Bundesliga outfit Hoffenheim last season as he scored seven goals and registered 10 assists in 33 league appearances.

He has also taken to the international stage with relative ease and has found the back of the net four times in just nine games including a crucial goal against Venezuela last week.

His addition could just be what the Reds need after a difficult 2014-15 campaign and Kop supporters will be hoping Firmino can be the one to help fill the void left by Luis Suarez, who joined Barcelona last summer and whose departure made a serious dent to the club’s attacking prowess.

Liverpool scored only 52 goals in 2014/15, down from 101 the season before when their attack really clicked into gear, so it’s clear that manager Brendan Rodgers could benefit from a player like Firmino to liven things up again and add a new dimension to the team’s game.