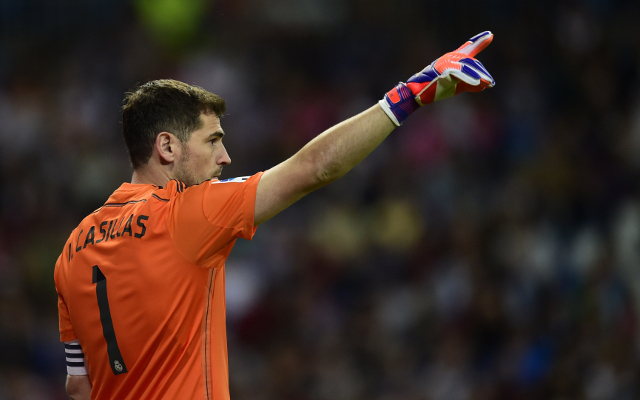 Iker Casillas has emerged as a potential transfer target for Serie A outfit Roma, meaning his departure could pave the way for David De Gea to join Real Madrid.

Mirror Sport claim that reports in Italy believe Roma have already made contact with the Los Blancos captain ahead of a potential summer transfer.

The Italian side are desperate for a new number one and have identified Casillas as their first choice target.

If the Rome based outfit are successful in their attempts in landing the 34-year-old, then it could result in De Gea finally completing his move to the Santiago Bernabeu from Manchester United.

It’s no secret that Madrid are interested in the 24-year-old, who will also likely succeed Casillas in the Spanish national team picture, but as of yet the two clubs have not agreed a fee.

Mail Sport reported during the week that United are demanding a world record fee for a goalkeeper in order for them to do business and are even willing to allow De Gea to run down his contract and leave for free next year.

This could be a piece of brinkmanship between the two clubs to see who blinks first, but there were reports [via Mirror Sport] that Madrid have set their sights on Bayer Leverkusen stopper Bernd Leno as a back-up option in case they fail to lure De Gea to the club.

However, a swap deal involving Los Blancos vice-captain Sergio Ramos emerged as a possibility last weekend [via Guardian Sport], as United manager Louis van Gaal looks to soften the blow of losing his number one keeper.

The thought of Madrid losing both of their authoritative figures in the squad in one summer is highly unlikely but it would appear one of them will have to make way in order for De Gea to join the club.