Sweden have been crowned UEFA U21 European champions for the first time in their history after a penalty shoot-out victory over Portugal on Tuesday night.

After a largely forgettable 120 minutes, the Swedes prevailed against all odds to claim the victory as goalkeeper Patrik Carlgren proved to be the hero as he saved twice in the shoot-out. 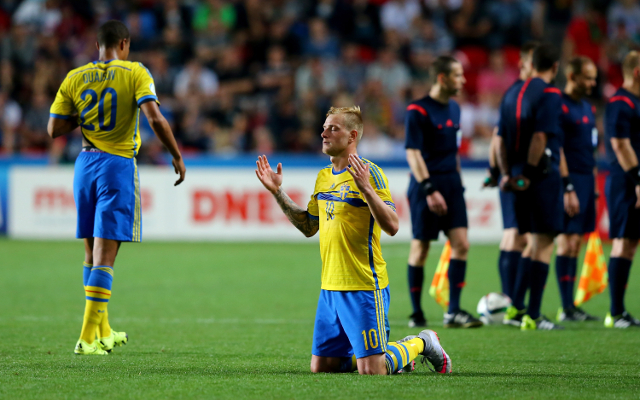 The Portuguese came into the game on the back of a convincing 5-0 thrashing over pre-tournament favourites Germany at the weekend.

Meanwhile their Swedish counterparts upset Denmark 4-1 to reach the final and advanced from a group containing the England U21 side, who were the only team to beat the Swedes throughout the tournament in the Czech Republic.

The majority of the game mirrored that of the group stage game between the pair six days ago, although there wasn’t to be any late drama in normal time with the best chance falling to Iuri Medeiros just after the hour mark as his curling effort just missed the far post.

The rest of normal and extra-time passed without too much attempts on goal as both sets of players were well aware that one mistake could have been so costly.

The final was to be decided on penalties and after the first five had been expertly converted, Portugal’s Ricardo Esgaio saw his effort saved by Carlgren.

However,  Abdul Khalili’s poor effort was easily saved by Jose Sa immediately afterwards as Sweden couldn’t capitalise on the advantage.

After Victor Lindelof converted his spot-kick to make it 4-3,  reported Arsenal target William Carvalho [via Standard Sport] suffered the indignity of seeing his crucial penalty saved and with that it was the Swedes that were off celebrating.