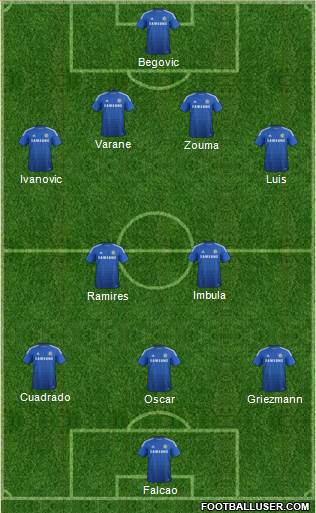 Secondly, with only Ivanovic and Oscar from the original lineup, Chelsea could also field this incredibly strong team. Asmir Begovic is wanted from Stoke City as a replacement for backup goalkeeper Petr Cech and would get into most top Premier League sides. In defence, Raphael Varane could also be signed to add depth alongside fellow Frenchman Kurt Zouma.

In midfield, Chelsea want Marseille youngster Giannelli Imbula as a possible replacement for John Obi Mikel, while another Frenchman in Antoine Griezmann could be brought in from Atletico Madrid and would surely challenge for a starting spot. Finally, Radamel Falcao comes in up front to play second fiddle to Diego Costa.