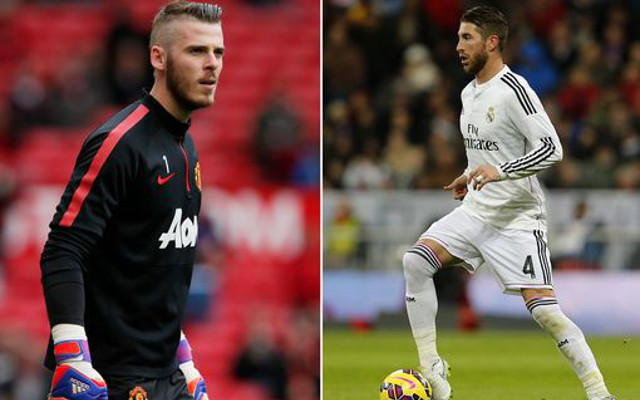 Former Real Madrid president Ramon Calderon has confirmed that should Sergio Ramos leave the Bernabeu he would only move to Manchester United, and also indicated that the defender’s future was inextricably linked with that of David De Gea.

The ex-Merengues chief also denied suggestions by Rio Ferdinand that Sergio Ramos was merely feigning discontent at the Bernabeu in order to secure a better deal with the Spanish giants.

Calderon argued that the two European giants were playing a ‘game of poker’ ahead of inevitable summer transfer dealing between the pair.

He also noted that De Gea would be “in the middle” of any dealings between the two clubs, as reported by the BBC.

England and Red Devils legend Ferdinand, who spent 12 years in the heart of the United defence, isn’t convinced that Ramos is genuine about his desire to leave the club, and argued recently that the defender was merely angling for a new contract.

“He’s a Real Madrid player with, I think, a new contract coming up. Maybe the agent is putting (rumours) out saying he wants to leave so Real Madrid come back in with a bumper offer and he signs on the dotted line.”

However, ex-Blancos chief Calderon has left the door open for Ramos to leave the Bernabeu this season, affirming that his contract concerns are genuine.

“Things are in a very bad situation,” he began.

“As time has gone on, things have not only not improved, they have got worse.

“Now it is not a question of money. It is a lack of affection the player is feeling from Real Madrid.”

Calderon went on to confirm that should Ramos leave, it would only be to United, despite rumours linking him heavily with a switch to Manchester City over the last week [Mirror].

“I know Sergio has told the general manager to listen to offers they get from Manchester United,” the former football administrator continued, denying suggestions that the 29-year-old could move to the Etihad Stadium.

“He only wants to go to United.”