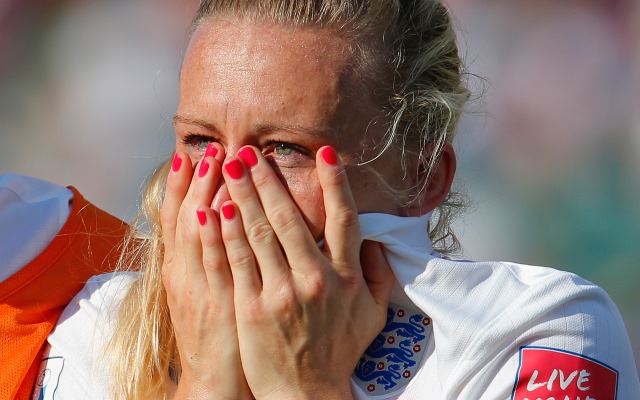 England’s World Cup dream came to a screeching halt on Wednesday evening when Mark Sampson’s ladies were defeated 2-1 by Japan after a 92nd-minute own goal by Laura Bassett in the semi-final.

The defender was in tears after the match after contributing so brutally to the Lionesses’ elimination from the tournament at the semi-final stage.

England demonstrated their defensive resiliency throughout the contest, and appeared to be largely in control against a Japanese side who were growing frustrated in the face of such a watertight backline.

Bassett herself had been one of the game’s outstanding individuals, but her contribution will be remembered for an extraordinary moment of misfortune, when she lost balance during an attempted clearance and chipped the ball over keeper Karen Bardsley.

The Notts County star watched on in agonised anticipation, before burying her face in the turf as the ball looped into the net.

The Japanese took the lead through skipper Aya Miyama, before Fara Williams equalised from the penalty spot for Sampson’s side.

However, despite looking good for extra time, England were unable to see out the contest, with Bassett’s nightmare moment ending the Lionesses’ World Cup dreams.

Japan now advance to face the United States, while the Bassett and co. will meet Germany in the third-place playoff.