According to reports in Portugal, Manchester United have a deal in place to sign Benfica attacking midfielder Nicolas Gaitan, but the winger will only agree to move should Angel Di Maria.

The Argentine international has been heavily linked with a move to the Premier League in recent weeks and months, and according to O Jogo, a deal looks imminent.

The Portuguese newspaper [as translated by Sport Witness], have reported that the Red Devils have a €30m [£21m] verbal agreement with the Primeira Liga giants.

However, it is understood that the deal, as it stands, would only go through if Angel Di Maria were to leave Old Trafford, with Gaitan worried about his first-team prospects should the ex-Real Madrid man stick around in the north-west.

The Benfica man’s compatriot has endured a tricky first season in England, and has received criticism from fans, despite contributing 10 assists [Daily Mail].

Di Maria has been linked with a move to Bayern Munich and Paris Saint-Germain, although as yet, no move has been forthcoming [Express].

Should Di Maria remain at Old Trafford, it is thought that Gaitan would rather move elsewhere.

Atletico Madrid have been linked with his signature and, with Arda Turan rumoured to be leaving the club [Daily Star], Diego Simeone is understood to be considering Gaitan as a potential replacement [Express].

The 2014 La Liga champions may also face competition from Liverpool, with the Express noting that Brendan Rodgers has also been keeping tabs on the offensive talent this summer. 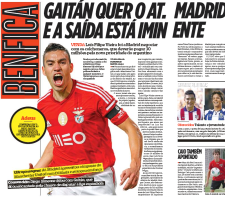