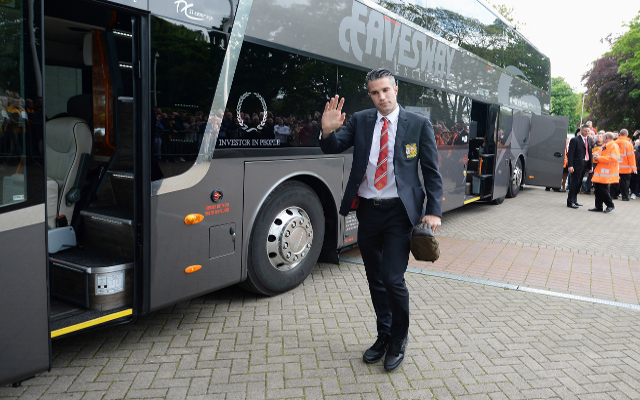 Manchester United striker Robin van Persie agreed personal terms with Fenerbahce on Saturday, and should be confirmed by the club imminently.

The 31-year-old may be coming off the back of a tricky campaign at Old Trafford, having managed only 10 goals in 27 appearances for the Red Devils, but he still leaves some find memories behind him in Manchester.

The forward scored 26 goal and 38 appearances during his first season at the club, winning both the Premier League and the Charity Shield under first, Sir Alex Ferguson, and then David Moyes.

However, the Dutch hitman struggled under the Scottish coach, before declining even further under Louis van Gaal, as injuries began to take their toll.

The transfer looks to have also brought the curtain down on the player’s career in the Premier League, where he arrived in 2004 after swapping Feyenoord for Arsenal.

He managed 96 goals in 194 appearances at the North-London club, becoming the darling of the fans, before prompting acrimony when he left for Old Trafford.

Here’s how fans reacted to the news of his imminent departure on Twitter:

Robin van Persie cost us £24 million and won us the title. But the tears from Arsenal fans are priceless.

Barber: “What haircut do you want?” Ozil: “Give me a graph of Van Persie’s career development after he left Arsenal pic.twitter.com/UlA0jH0KnD

@__arsenal_news_ …and won the Premier League title with Manchester United.

Robin van Persie heading to Turkey then. Agree that he is not up to the level they need anymore…

Apparently Van Persie has agreed terms with Fenerbahce. The little boy inside him said it was time to earn a sh*tload of money in Turkey.

Arsenal fans slagging van Persie off …. He joined United to win the league, he did that and you applauded him. pic.twitter.com/QApPgMNr3m