Arsenal midfielder Mesut Ozil has had the privilege of playing alongside some of the very best players in the world during his short career and he’s named his ultimate XI.

The playmaker played for La Liga giants Real Madrid before joining the Gunners in the summer of 2013 and also lifted the World Cup with Germany last year.

With the wealth of talent Ozil has played alongside at club and international level, it would have been tough for the 26-year-old to choose just eleven players.

Take a look at his XI that features just one of his current teammates by choice and another because of sympathy:

Many have doubted the credential of Casillas in the last 18 months after a string of high-profile mistakes for club and country, but Ozil has named the Real Madrid stopper as the best he’s played in front of.

No surprise to see Ozil’s former captain at international level make the team and Lahm has consistently been one of the best players in the world in the last decade and has proven he can do it in midfield too.

The pair celebrated reaching the pinnacle of any professional footballer by lifting the World Cup together last summer. 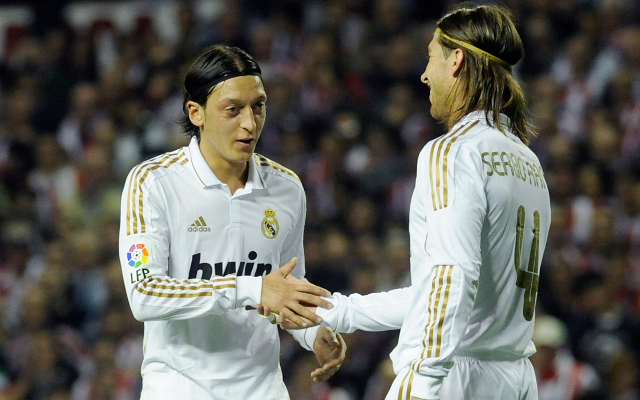 If rumours are to be believed then Ozil could face his former Madrid teammate in the Premier League this season [via Metro Sport] . It’s not a shock to see Ramos make this team given how close he and the German were at the Santiago Bernabeu.

Barring being embarrassed by Lionel Messi in the Champions League semi-final at the Camp Nou last season, Boateng has been one of the best defenders in Europe over the past two years and deservedly makes Ozil’s ultimate XI.