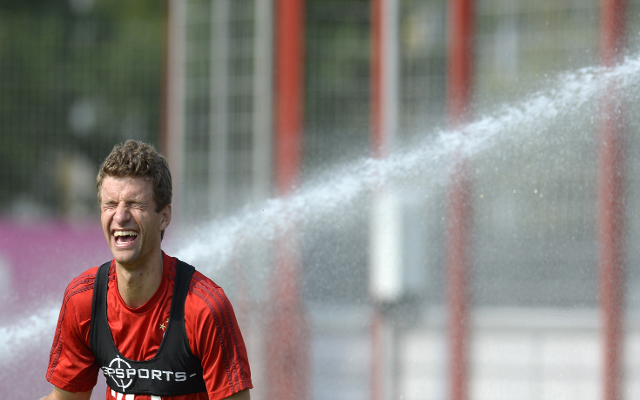 Man United are reportedly ready to dig deep in their pursuit of Bayern Munich star Thomas Muller, with German source Sport1 claiming the Old Trafford side will offer €82m (£58m) for the attacker.

The Old Trafford side have been linked with an interest in the 25-year-old for some time now [via the Independent] and the Allianz Arena star is a player boss Louis van Gaal knows well from his time in charge of the Bavarian giants.

Van Gaal offered Muller a prominent role in the Bayern Munich first team set-up, helping the lanky forward to make a name for himself, and now according to Sport1 the Dutchman is ready to make a big-money offer for his services.

Muller is a versatile attacker who has thrived in a wide-role in recent seasons, helping Bayern Munich to three successive Bundesliga titles, whilst also playing a key role in Joachim Low’s World Cup winning side.

Louis van Gaal’s side lacked a prolific marksman last term, with loaned-in Colombian Radamel Falcao and experienced forward Robin van Persie both failing to impress, and a move for a fresh goal-scoring option would be a sensible option to consider.

Thomas Muller has netted 71 goals over the course of the past three seasons at Bayern Munich and grabbed five goals at the 2014 World Cup finals, so clearly knows where the back of the net is, though the attacker offers so much more than just this attribute.

Last term only two players notched up more assists in Bundesliga action in 2013/14 and repeated that feat in 2013/14, going someway to display what a rounded talent Thomas Muller has matured into over the years.