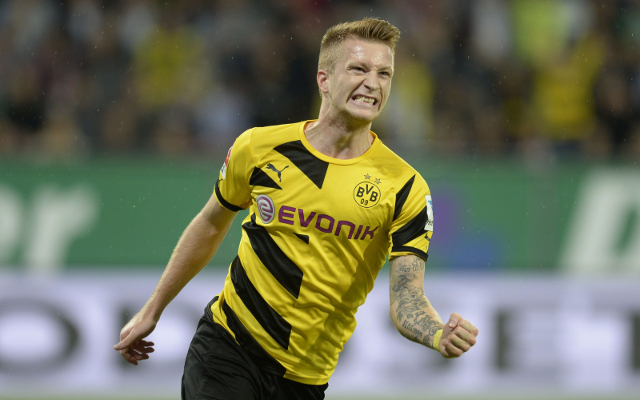 According to reports, Marco Reus has no desire to move to Barcelona, possibly paving the way for switch to the Premier League.

The Borussia Dortmund star is in demand, and has been linked with a move to EPL quartet Manchester United, Chelsea, Arsenal and Liverpool, as well as the Catalan giants.

However, according to the Express [via the Daily Star], the German international has ruled out a possible transfer to Barcelona.

The English tabloid report that that Germany international had been linked with a move to the Camp Nou for January, when the player-registration ban currently restricting Luis Enrique’s side comes to an end.

However, the forward has confirmed that he would not be keen on moving to Spain to compete for a place amidst the mesmerising attacking three of Luis Suarez, Lionel Messi and Neymar.

This news may well come as a boost for the Premier League quartet, all of whom have previously been linked with a move for the attacker [Daily Star].

Unlike at Barcelona, where Reus may have to settle for a backup role, the 26-year-old could be fairly confident of establishing himself in the starting XI of any of the EPL foursome mentioned above.

However, it remains to be seen whether any of his potential suitors will move for the international.

Reus had been available for £19.8 million earlier in the summer due to an exceptionally low fee-release clause.

However, having signed a new contract with BVB, any would-be buyers would have to pay a much higher fee to snare the talented midfielder.

The player’s injury concerns are also well documented; Reus missed the World Cup due to injury, and is currently coming off the back of another campaign compromised by fitness issues [Mirror].