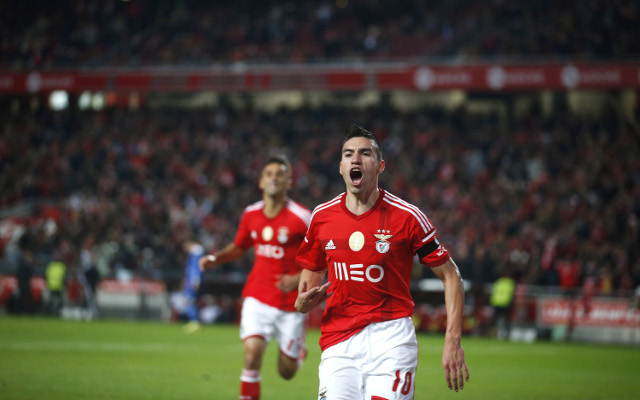 Just five days ago, the Express reported that the Argentina international is not short of interest ahead of the 2015-16 season, and is rumoured to be eyeing a switch to Old Trafford, ahead of other alleged suitors, Atletico Madrid.

In an update on the speculation, according to Portuguese newspaper A Bola [via the Daily Star], while the 27-year-old’s £25m release-clause is said to be a price too steep for the Premier League giants, Louis van Gaal remains keen on the midfielder’s signature, and could be set to table a player-plus-cash deal, involving either Javier Hernandez or Rafael da Silva.

The report claims that United are considering offering either of the said players and £21.5m in a bid to persuade Benfica to part with their No.10.

With Angel Di Maria’s future at the Theatre of Dreams increasingly uncertain – following reports from the Independent stating that the former Real Madrid winger is close to agreeing a £43m transfer to Paris Saint-Germain – Gaitan could be considered his international team-mate’s direct replacement in Manchester.

The former Boca Juniors ace had far from his finest campaign last season, scoring four goals in 26 Primeira Liga starts; however, that statistic doesn’t appear to have deterred the interest of van Gaal.

Chicharito, one of the players who could be used to snare Gaitan, is reportedly a transfer target of Sevilla [International Business Times], while it remains to be seen whether Liverpool-who are also understood to be interested in the Argentine-will also look to sign him [Express].

Rafael had already become a peripheral figure at Old Trafford before the club launched a move for Italy full-back Matteo Darmian. Should the right-back complete his move to United-as he is expected to imminently [Daily Mail]-Rafael would surely be set for the exit door.