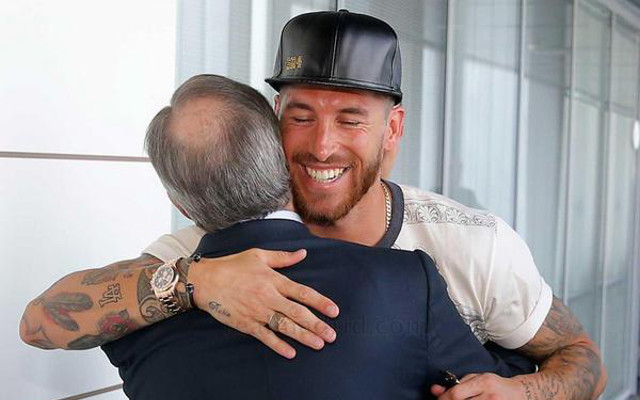 Manchester United target Sergio Ramos was pictured in a a happy embrace with Real Madrid president Florentino Perez on Thursday.

This image suggests that – once more – the Premier League could be set to miss out on another heavily linked superstar, as the Spain international, after a player’s meeting at the club’s Valdebebas training ground, was snapped hugging president Florentino Perez.

As is plain to see, the centre-back looks far from the miserable man who allegedly wishes to soon escape Madrid – a depiction that has been extensively covered over the past few weeks.

Reports earlier this month suggested that the Santiago Bernabeu superstar had informed Los Blancos that he wants out of the Spanish capital this summer, and has ordered Real to negotiate only with the Red Devils [via Sky Sports].

Nonetheless, despite the connotations of happiness above, Iker Casillas – who is poised to end his 25-year career with the La Liga BBVA giants and seal a move to FC Porto at the end of this week – was all smiles with Perez, too…