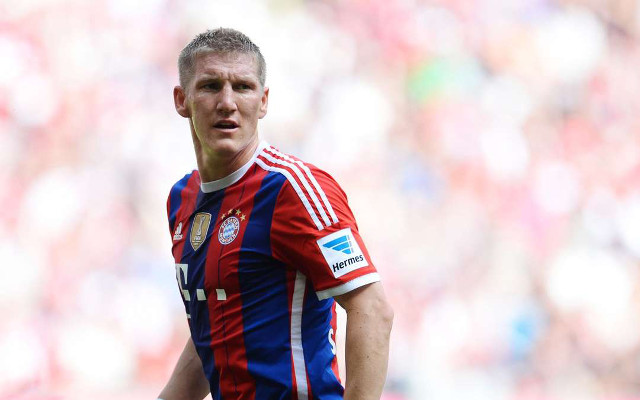 Manchester United have offered Bayern Munich’s Bastian Schweinsteiger a two-year contract, according to reports from Germany.

According to German newspaper Bild, the Red Devils have tabled a two-year deal for the Allianz Arena legend to consider, and Louis van Gaal is confident that the Germany international will be walking out at Old Trafford next season.

With just one remaining year on his current contract in the Bundesliga, van Gaal is keen to land the decorated midfielder at a cut-price this summer to strengthen his arguably susceptible midfield, and to potentially replace Michael Carrick, 33, who isn’t without his injury concerns in the latter stages of his career.

According to the Metro, the 30-year-old carries a price-tag of £10m, and while perhaps past his peak, to have a World Cup Winner at Manchester United could prove a significant signing – if not on the field, then in the dressing room and even in the club store.

The Red Devils are also said to be closing in on a deal for Southampton’s Morgan Schneiderlin [via the Daily Mail] – suggesting that there could be a much-changed midfield at the Theatre of Dreams next season.

What’s more, on Thursday night, it was also claimed that the Premier League giants were to increase their efforts to sign Schweinsteiger’s Bavarians team-mate Thomas Muller – after Robin van Persie opened talks with Fenerbahce – and were set to make an offer of £60m for the striker’s signature [via the Daily Star].