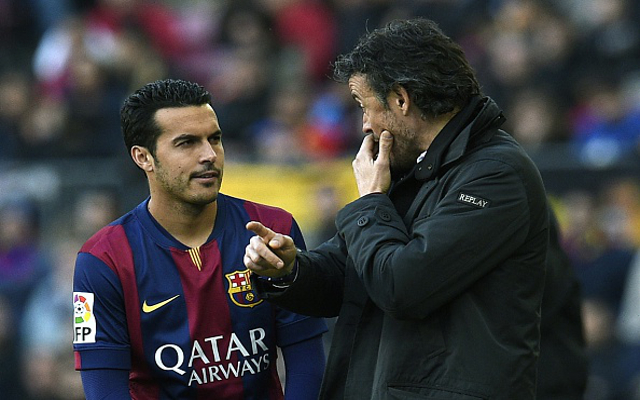 Chelsea are being tipped to activate the £21.5m release clause for Barcelona winger Pedro this summer, with the player already said to have rejected approaches from Arsenal and Liverpool, according to Spanish publication Sport.

The 27-year-old has recently signed a new contract at the Nou Camp which saw his buy-out clause drop significantly, with Sport claiming he is now available for £21.5m where previously his price had been set at around £107.8m.

After a glittering career spent entirely with Barcelona so far, Pedro has proven a big player for the club in their huge recent success, though he saw significantly less playing time last season after the signing of Luis Suarez from Liverpool took up another place in the team’s attack.

Manager Luis Enrique may now be open to letting the Spanish international leave the club this summer, and it seems Pedro himself could be interested in joining Chelsea as they seem to be showing an interest.

The Daily Express have also picked up the story, with Arsenal and Liverpool still mentioned as contenders alongside Chelsea, so it remains to be seen which club the player could still end up at.

Jose Mourinho could certainly do with more options in attack after being somewhat reliant on Diego Costa and Eden Hazard last season, and Pedro’s prolific record shows he could be an upgrade on players like Oscar, Willian and Juan Cuadrado in the attacking midfield department.

Despite limited playing time in 2014/15, Pedro still managed 11 goals, following on from 19 the year before. Meanwhile, Willian managed just four last season, Oscar only seven, and Cuadrado none after a disappointing spell following his January move from Fiorentina.