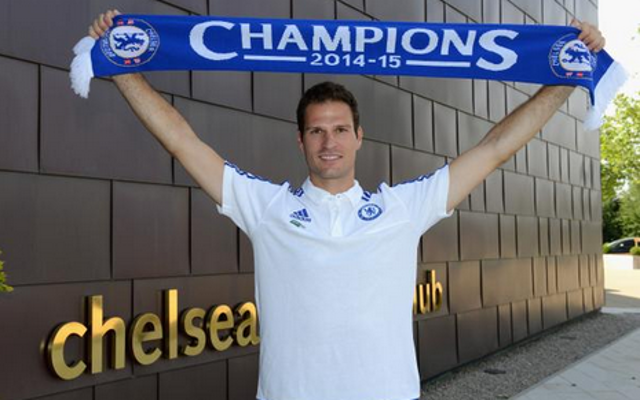 .@ChelseaFC is delighted to announce the signing of Asmir Begovic from Stoke City… http://t.co/KkMOeBzIWk pic.twitter.com/g2bPjRn770

The 28-year-old will come in to replace Petr Cech, the long-serving Blues star having moved to Arsenal earlier this summer, and will act as a back-up to first-choice starter Thibaut Courtois.

Bosnian international Begovic moved to the Britannia Stadium from Portsmouth in 2010 and made 172 appearances for the Potters. He has just a year to run on his Stoke City contract [via the BBC].

Jose Mourinho ushered in young Belgian Courtois last summer following his successful three-year stint on loan at Atletico Madrid, and Begovic will have his work cut out trying to oust the towering 23-year-old from the Chelsea starting eleven.

Having been a virtual ever-present at Stoke City, it’s clear that Begovic will likely have to prepare for a spell warming the bench, although perhaps the chance of playing for a side with ambitions of securing major honour was enough of a lure for the 6ft 6in keeper.

Begovic is the third signing made by Mourinho this summer, with the Chelsea manager having already brought in young Brazilian Kenedy and AS Monaco forward Radamel Falcao on a loan deal.

There is clearly a good relationship between Chelsea and Stoke City with Mark Hughes, a former Blues player, having taken forward Victor Moses on loan last season and agreed a deal to bring in Dutch midfielder Marco van Ginkel for the coming campaign [via the BBC].