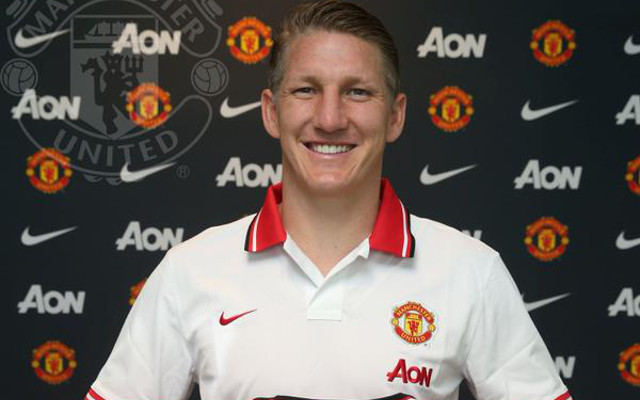 Manchester United have completed the signing of Bastian Schweinsteiger from Bayern Munich, as announced on their official site.

The Germany international is the Red Devils’ third signing of the summer, after Matteo Darmian and Memphis Depay joined from Torino and PSV Eindhoven respectively. Southampton ace Morgan Schneiderlin was confirmed by the club moments after Schweinsteiger’s arrival was announced [ManUtd.com].

Upon having his three-year contract announced, the World Cup winner said, “I have thoroughly enjoyed my time at Bayern Munich, it has been an incredible journey and I didn’t take the decision to leave lightly. Manchester United is the only club that I would have left Munich for.

“I feel ready for this new and exciting challenge in what I regard as the most competitive league in the world and I am looking forward to working with Louis van Gaal again,” he continued, speaking to the official club side.

“I will never forget my time at Bayern Munich and I would like to thank everyone at the club and the fans for the great memories.”

Manager Louis van Gaal added, “Bastian is, of course, no stranger to me. I worked with him during my time at Bayern Munich and I am truly delighted he is joining Manchester United. His record speaks for itself; he has won every honour at club level and was a major part of the successful Germany World Cup-winning team last summer.

“Bastian is the ultimate professional and there is no doubting his talent and his ability to control games. He brings a wealth of experience and is an excellent addition to our squad.”

The 63-year-old worked with Schweinsteiger while he was in charge at the Allianz Arena, and was the manager who moved him from on the wing in to the middle. The player could now feature there in place of Michael Carrick for United.

Van Gaal isn’t the only high-profile figure to have praised the Red Devils’ new signing.

Jupp Heynckes, the manager under whom Schweinsteiger won the Champions League in 2013, also praised the deep-lying playmaker, likening him to German great Franz Beckenbauer on the eve of his move to Old Trafford.

“Bastian was the heart and soul of the team at Bayern. He did everything in the team’s best interest rather than think about himself,” Heynckes began, speaking to Kicker [via the Standard].

“He is a true icon for the Bayern fans, someone they can identify themselves with,” he continued, “Schweinsteiger is right up there with Franz Beckenbauer and Gerd Muller. The Bundesliga and German football will miss him.

“There will not be another player like him at Bayern.”

The midfielder won eight German titles with the Bavarian giants, as well has eight German cups. He also lifted the Champions League once and raised the World Cup with Germany in 2014.