Old Trafford side close in on Benfica star.

Manchester United are close to completing the signing of Benfica winger Nicolas Gaitan according to Portuguese source O Jogo.

The two clubs are on the verge of agreeing a fee for the 27-year-old Argentine international and Gaitan could be the latest signing made by the Old Trafford side.

O Jogo claim the fee for Gaitan would be €30m (£21m) with the two side having reached a ‘verbal’ agreement on the deal. 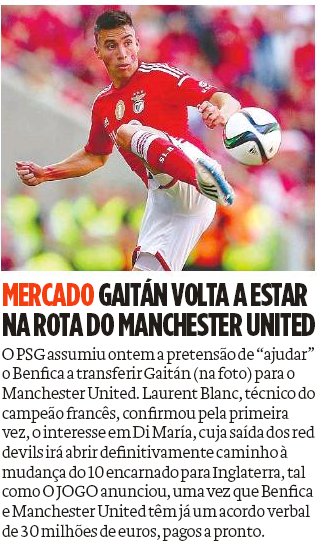 Gaitan has long been linked with a move to Man United, with Sir Alex Ferguson having targeted the South American in the past [via Daily Telegraph], and Louis van Gaal has already been very active in the summer transfer market.

Man United have already confirmed the signings of Memphis Depay, Matteo Darmian, Morgan Schneiderlin and Bastian Schweinsteiger with Louis van Gaal having secured a return to Champions League action for 2015/16.

Gaitan moved to Benfica in 2010 and has proven a big success in Portugal, playing a key role in his side’s back to back Primeira Liga title triumphs in 2013/14 & 2014/15, and should he move to Man United then van Gaal will have a host of wide-attacking options at his disposal.

Reports [via Goal.com] state that Brazilian full-back Rafael could be part of any deal that would see Gaitan move to Man United.