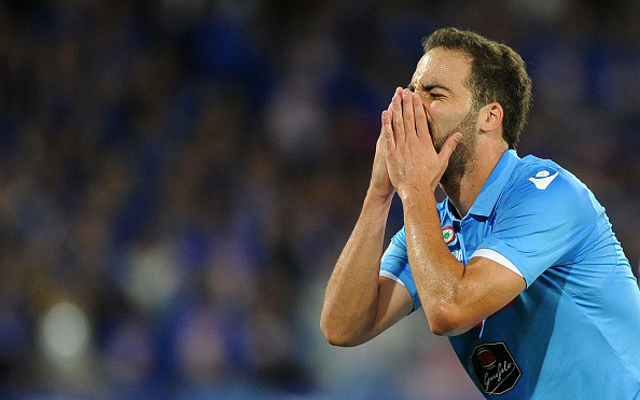 Napoli president Aurelio De Laurentiis has moved to confirm that Gonzalo Higuain will not be leaving the club this summer, despite interest from Arsenal.

The Argentine forward’s future has been the subject of intense speculation this summer, following both Napoli’s inability to qualify for the Champions League and the departure of head coach Rafael Benitez.

Daily Star reported that the former Real Madrid hitman was keen to leave the San Paolo and seek his fortunes elsewhere.

As a result,the 27-year-old has been heavily linked with a move to the Premier League, with both Arsenal and Manchester United named as potential suitors by the Express.

However, De Laurentiis has moved to close down any possibility of a Higuain departure, confirming that the player will still be in Naples next term.

“Gonzalo Higuain has no chance of leaving,” he began, as reported by Le 10 Sport, “he is and will be a Napoli player.

“Nicolas (his brother and agent), who I appreciate enormously, lives far away from Italy and can’t follow the constant false statements made in the Gazzetta dello Sport,” he concluded.

“This is why I am clarifying things for you.”

De Laurentiis’s statements appear to have clarified any lingering doubts on the part of Higuain and his agent.

Nicolas, as reported by Four Four Two, admitted that he didn’t know whether the Napoli president was open to the idea of selling his brother or not. The latest comments appear to leave no room for speculation.

He also found the net in the Copa America, scoring two goals in four outings as the Albiceleste secured the silver medal.