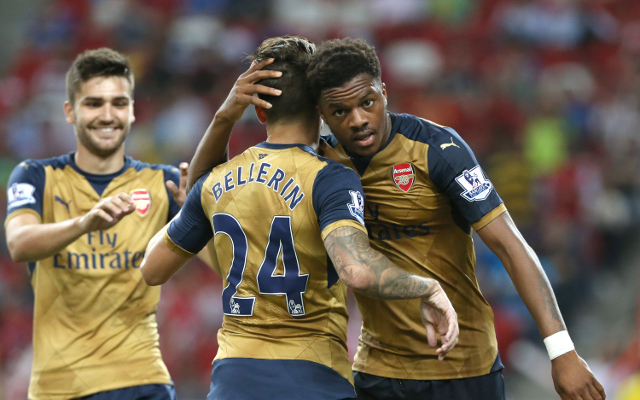 Arsenal have been linked with a host of new strikers during the summer transfer window, but it appears manager Arsene Wenger may have already found the answer: Anglo-Nigerian forward Chuba Akpom.

Many Gunners supporters and those in the media believe the Gunners need to recruit a world-class centre-forward in order to compete for the Premier League title this season and that has seen many new arrivals tipped with a move to the Emirates Stadium [Mirror].

There has been heavy rumours that Wenger is a huge admirer of Real Madrid striker Karim Benzema and it has been reported in Spain [via Metro Sport] that a bid has been launched for the French international.

Another rumoured transfer target is Napoli’s Gonzalo Higuain, who came close to signing for the Gunners in the summer of 2013 [via Guardian Sport], and it has been widely speculated that Wenger is ready to re-ignite his interest in the striker who scored 18 Serie A goals last season [via Telegraph Sport], however his hefty price-tag of £65 million could scupper any deal.

However, it seems that the French manager may not have to dip into the transfer market for a new forward after all, following a stunning performance from youngster Akpom during the club’s first game of their pre-season tour in Singapore.

The highly-rated 19-year-old, who signed a new long-term deal with the club at the start of year, attempted to force his way into Wenger’s plans for the new season by scoring a hat-trick against an admittley poor Singapore Select XI and his goal haul certainly didn’t go unnoticed by the boss, who says he plans to keep the player at the club this season:

“I sent him out on loan last year because I thought he needed that. This pre-season, during the season I plan to keep him with us,” the Frenchman revealed to the club’s official website.

“He has that grade to make between being a big talent and after an efficient talent week in, week out. That’s of course the target,” Wenger added.

Akpom broke the deadlock in Asia on the half hour mark as he was the quickest to a loose ball in area to lash the ball into the back of net.

His scored again after 76 minutes with a coolly taken penalty after Mathieu Debuchy was brought down in the area and then completed his hat-trick three minutes later with a thumping header from a Hector Bellerin cross.

On this showing, is Akpom ready for a more prominent role in the Gunners first-team for the upcoming season?