It looks like nobody told Manchester United midfielder Ander Herrera about the Red Devils’ recent summer signings, as the Spanish midfielder was all smiles during the club’s pre-season tour of the United States.

Herrera posted a photo of himself with Antonio Valencia to his official instagram account, with the two of them apparently blissfully ignorant that they may well be sent to spend the coming campaign on the bench.

Ahead of the club’s trip to the States, Louis van Gaal completed the signings of both Bastian Schweinsteiger and Morgan Schneiderlin, who arrive from Bayern Munich and Southampton respectively. 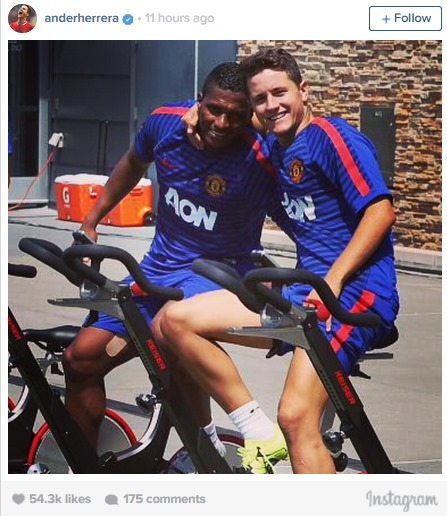 The two incoming stars are unlikely to settle for backup roles, meaning that Herrera—who featured 26 times in the centre of midfield last term—may see his playing minutes reduced this term.

His teammate Valencia—also pictured smiling on the pair of exercise bikes—may also find his place under threat next term.

The Ecuador international—who was originally a right winger before being converted to right-back—managed 18 appearances at full-back last term, but will surely become a peripheral figure following the arrival of Matteo Darmian from Torino.