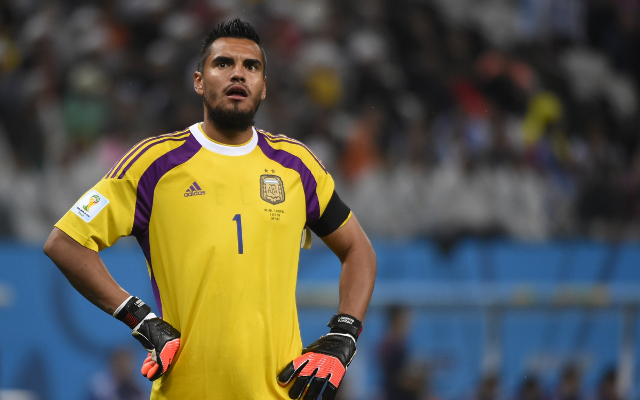 Manchester United are in pole position to sign free-agent Sergio Romero this summer.

According to Italian journalist Gianluca Di Marzio, the Red Devils are favourites to secure the signature of the Argentina international, and have offered the goalkeeper a contract worth €2m (£1.4m)-per-year.

The stopper spent the previous campaign on a season-long loan from Sampdoria with AS Monaco, but is searching for a new club before the start of next term after becoming a free-agent, Sky Sport Italia’s Fabrizio Romano tweeted.

While supporters may believe that the 28-year-old could be viewed as a replacement to Real Madrid target David De Gea [via the Mirror], Manchester Evening News suggest that Romero may be brought in as a result of Victor Valdes’ uncertain Old Trafford future.

On Thursday morning, BBC Sport reported that Louis van Gaal will listen to offers for the former Barcelona stopper, as the Dutchman is furious with the 33-year-old for allegedly refusing to follow his philosophy:

“He doesn’t follow my philosophy. There is no place for someone like that,” van Gaal told BBC Sport.

Earlier today, Valdes caused a social media stir after tweeting an image displaying the Under-21 games he has played for United with the caption ‘? #respect’ – a suspected dig at the club – suggesting that his exit from the Theatre of Dreams could be imminent:

While Valdes looks set to depart just seven months after swapping the Camp Nou for the Theatre of Dreams [via BBC Sport], David De Gea – whose future has been the subject of much speculation over the past few months – will allegedly see out the final year of his contract before making a move to the Santiago Bernabeu next summer.

According to Marca, a pact between United and Real has been agreed – whereby the La Liga BBVA giants have been told that they can sign the former Atletico Madrid star in a year’s time. However, if they change their minds in the next 12 months on luring him to the Spanish capital, they will be required to pay the Red Devils a €5m (£3.5m) penalty – which is the 24-year-old’s annual salary in Manchester.