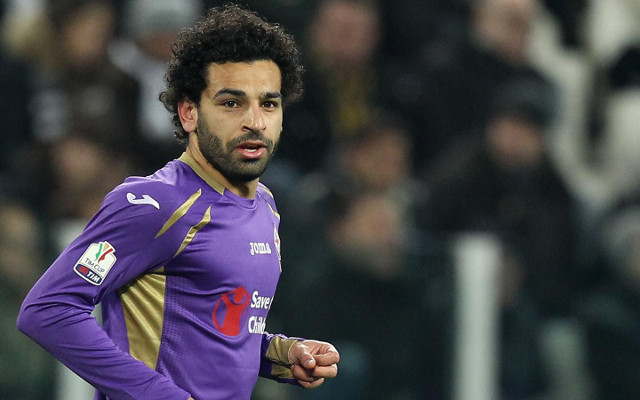 Liverpool have approached Chelsea over the signing of Mohamed Salah, reports the Daily Express.

The 23-year-old’s future has been complicated following the fallout over his loan deal with Fiorentina; the Egypt international has been signed a 18-month loan deal with the Serie A side in January, but has now severed all ties with La Viola.

The player is thought to be eyeing a move to Inter Milan [ESPN], but it is the Anfield outfit who could be ready to pounce on the situation. However, they are waiting to see how things play out before making a move, fearing UEFA sanctions as a result of the disagreement between Salah and Fiorentina.

The winger impressed in Serie A before the breakdown in relations, managing six goals and three assists in 16 appearances during the second half of the Italian season. To make that more impressive he only started ten of those games, and was parachuted into the side part-way through the season.

This could make him a good replacement for Raheem Sterling, who recently joined Manchester City [The Guardian]. Both are able to play on the wing and centrally, and are great dribblers of the ball.

The Merseyside outfit have already signed six players this summer, including two players who could do a job in wide areas; Danny Ings, Joe Gomez, Adam Bogdan, James Milner, Nathaniel Clyne, and Roberto Firmino have joined already, and with Aston Villa star Christian Benteke being heavily linked by the BBC, they could soon complete their seventh addition.

Could Salah be number eight?

After finishing a disappointing sixth in the Premier League last season, this major overhaul seems to be manager Brendan Rodgers’s attempt to get the Reds back in to contention for a place in the top four. Champions League football is a must if they are going to be able to hold on to players like Sterling.