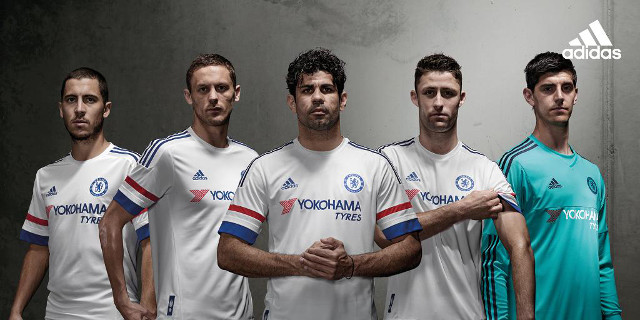 Chelsea release their official 2015-16 home shirt and, a day later, images have emerged of the Premier League champions’ away kit for the new season.

The away kit is yet to be officially unveiled by the west London giants, and is not known when it will be released – but following the appearance of the official poster, featuring Jose Mourinho’s senior stars, it must be soon.

The Blues are currently training in Montreal before embarking on a pre-season tour of the United States, where they will face New York Red Bulls, Paris Saint-Germain and Barcelona in the International Champions Cup.

Latest signing Asmir Begovic trained for the first time with his new team-mates on Thursday, while striker Radamel Falcao will join up later after competing in the Copa America tournament.

Chelsea are only two weeks away from the FA Community Shield date at Wembley Stadium with Arsenal, before kicking off their title-defence on August 8th at Stamford Bridge to Swansea City.