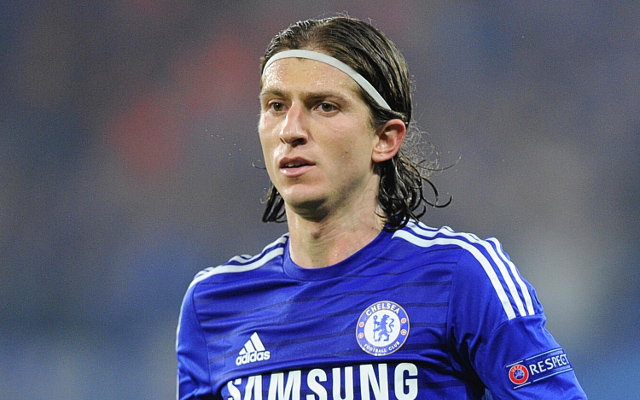 Atletico Madrid have confirmed that talks are currently underway with Chelsea’s Filipe Luis.

On Thursday night, the Mirror claimed that Jose Mourinho was preparing to grant the Brazil international a exit – after just one season at the Stamford Bridge – suggesting that a return to the Estadio Vicente Calderon could be expected to be go through shortly.

Atleti president Enrique Cerezo has now confirmed that the La Liga BBVA outfit are in talks over the Blues defender reuniting with Diego Simeone this summer, and has voiced his confidence that a deal can be concluded in this summer’s window:

“There are negotiations in place but I don’t know how fruitful they will be,” as quoted by Goal.

“Filipe Luis is a magnificent player. We would be delighted if he comes back and I think that in the end, we will find a solution.

“As always, the financial aspect takes precedence over the sentimental aspect but I believe a deal can be reached.”

The 29-year-old put pen-to-paper on a three-year deal with the Premier League champions a year ago [via BBC Sport], but struggled to pip Cesar Azpilicueta to a place in Mourinho’s XI – making just nine starts in England’s top flight.

His bench-warming role in west London was certainly an unfamiliar scenario for Filipe Luis – who made 42 combined starts in La Liga and the Champions League prior to his transfer to the English capital.

At 25-years-old, Azpilicueta is certainly a long-term prospect for Mourinho, which leaves the Brazilian’s future appearing bleak under the Portuguese manager.

What’s more, with his 30th birthday fast approaching, Filipe Luis may be unprepared to possibly spend another campaign playing second-fiddle to the Spaniard.

The Mirror stated that Mourinho has determined who Filipe Luis’ replacement would be – Augsburg’s Abdul Rahman Baba.

Rahman played a key role for the Bundesliga outfit last season – averaging 4.8 tackles per-game – as they secured their highest position in Germany’s top flight in the club’s history.