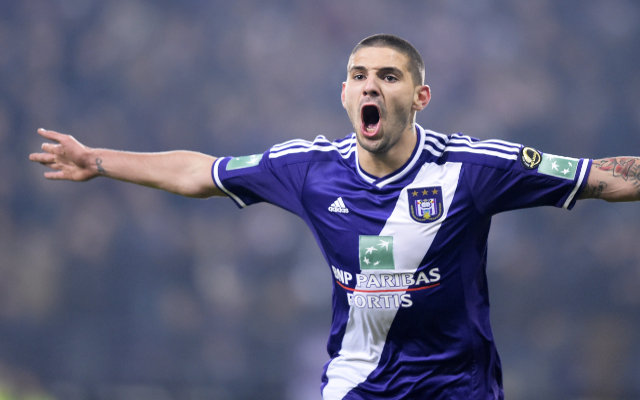 The 20-year-old Serbian international has proven a massive hit since moving to Belgium and is rightly considered one of the hottest young forwards in European football.

Mitrovic grabbed 16 goals in his debut season at Anderlecht and the striker followed up that haul with 28 goals in 2014/15.

The Daily Star claim that both Newcastle United and Swansea City are keen on Mitrovic.

Last term Mourinho was overly reliant on Spanish international Diego Costa and has moved to strengthen his attack by signing AS Monaco’s Radamel Falcao on a season long loan deal.

Mitrovic may lack top level league experience but given the potential he has shown, one can well see why Mourinho would take a keen interest in the former Partizan Belgrade man.

Chelsea have been strongly linked with a move for Barcelona attacker Pedro (via the Independent) though perhaps a move for a young pretender would be a wiser option.

A move to either St James’ Park or the Liberty Stadium would certainly offer Mitrovic a more likely shot at regular first team football and a transfer to Stamford Bridge would almost certainly lead to the forward having to bide his time on the bench.

Therefore Mitrovic is faced with a delicate balancing act of attempting to fulfill ambitions whilst also looking to serve the best interests of his overall career progression.

The Daily Star claim the forward wants a £60k a week deal, which could price out some prospective suitors, and also wants to secure Champions League action.

The presence of national team colleagues Branislav Ivanovic and Nemanja Matic at Chelsea could act as further motivation for a move to join the Premier League title-holders.

One wonders where such a move would leave Chelsea forward Loic Remy with the French international said to be keen on a move away from the West London side in pursuit of regular first team action (via the Daily Telegraph).