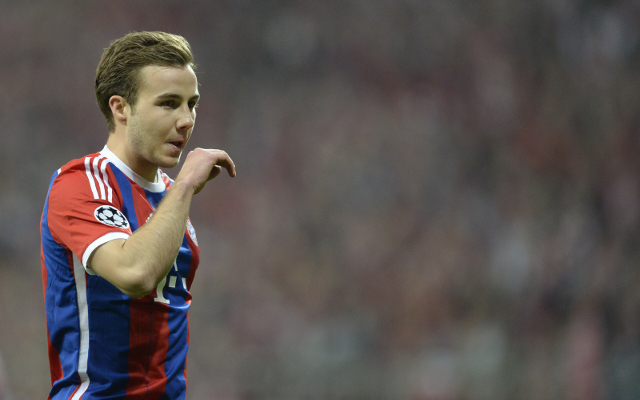 According to Tuttosport, the Serie A champions are currently negotiating with the Germany international, and may have won the race for his signature with Massimiliano Allegri allegedly assuring the forward of a starring role in Turin.

The Italian newspaper claim that the attacking midfielder’s relationship with his manager Pep Guardiola may have reached breaking point, and he is also rumoured to be furious that the club have allegedly made him available in this summer’s market.

The 23-year-old has previously been linked with Arsenal, Chelsea and United, with the Metro stating that the Premier League trio were willing to go head-to-head for the German – who, the British tabloid state, is valued at £49.6m.

Gotze’s future with the Bundesliga giants became significantly uncertain when his agent, Volker Struth, hit out at the club, earlier this month, for so far failing to support his client during his two seasons at the Allianz Arena:

“Of course I would have liked if Mario had felt more support in one or two situations,” as quoted by Sky Sports.

“I am fully convinced that when Mario feels this support, it is easier for him to show his incredible potential. Then he is one of the best players in the world.”

Gotze sealed a €37m (£31.5m) move from Borussia Dortmund in 2013 – with the transfer fee making him the most expensive German player of all time [via BBC Sport] before Mesut Ozil’s £42.4m move to Arsenal [via BBC Sport] – but he has failed to establish himself as a key part of the Bavarian’s since.

Last season, he was handed six different positions across midfield and attack, which suggests that perhaps Guardiola is unsure on where his No.19 fits into his current XI – or may not have confidence in his ability.

A number of Bayern players have been linked with exits this summer as, while the Red Devils confirmed the signing of Bastian Schweinsteiger in a £14m deal [via Sky Sports], Thomas Muller [via the Daily Star] and Robert Lewandowski [via the Independent] have also been linked to Old Trafford.