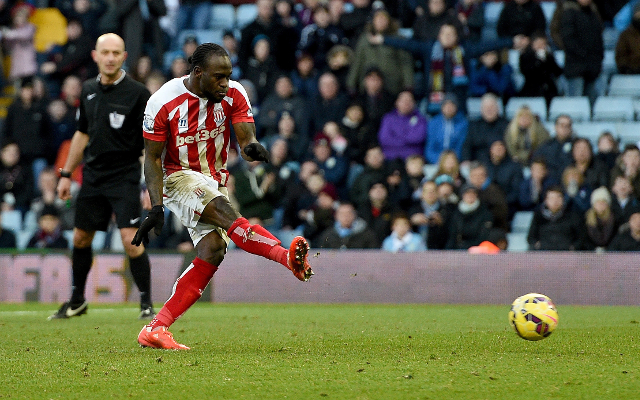 Tottenham have launched a bid for Chelsea winger Victor Moses according to the Daily Mirror.

The Nigerian international has spent the last two seasons out on loan at Liverpool and Stoke City and is now a target for White Hart Lane boss Mauricio Pochettino.

The Argentine manager saw Andros Townsend, Aaron Lennon and Erik Lamela all struggle for form in 2014/15 and as such a move for Moses would be a wise one to consider.

The Daily Mirror claim Spurs have offered £8m for the 24-year-old and go on to claim that Moses wants to return to London.

Moses would have his work cut out trying to force his way into Jose Mourinho’s starting eleven with the likes of Eden Hazard, Willian and Juan Cuadrado the Stamford Bridge side’s first choice options to fill flank roles.

The former Crystal Palace man netted 10 goals in his debut season at Chelsea, proving most effective in cup action, and made his last senior appearance for the club back in May 2013.

Last term Moses impressed at the Britannia Stadium and the Daily Mirror claim Jose Mourinho would be open to selling the attacker as Chelsea target Barcelona’s Pedro.

Tottenham may lose Townsend with the likes of Newcastle United & Sunderland keen on the England international (via Daily Star).

Pochettino has offloaded a number of his under-performing squad players over the summer with Tottenham having found buyers for Paulinho, Etienne Capoue, Lewis Holtby and Benjamin Stambouli looks set to follow suit with a move back to France on the cards (via the Daily Mail).