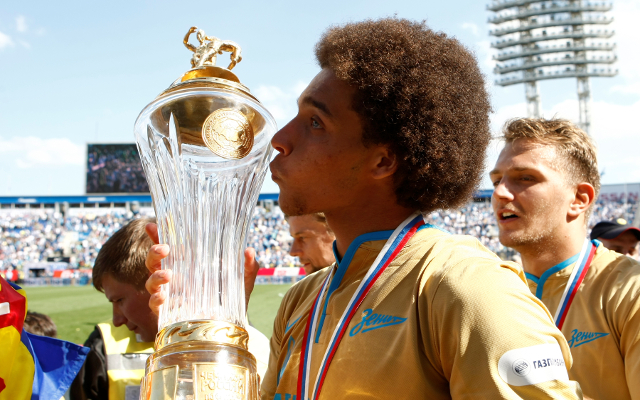 Chelsea are readying a bid for Zenit Saint Petersburg midfielder Axel Witsel according to Spanish source Fichajes (via Goal.com).

Jose Mourinho is keen to bring in the 26-year-old and Fichajes claim Chelsea will offer €33m (£23m) for Witsel as the Chelsea boss looks to improve his midfield options.

Fichajes believes that Chelsea’s failure at Champions League level in 2014/15, when they crashed out to PSG in the second round, will push Mourinho into investing in his squad.

Burly Zenit star Witsel is very much two midfielders in one. The 6ft 1in battler doesn’t shirk a challenge but is also capable of springing the play forwards and making a real nuisance of himself in the final third.

Last term Mourinho opted for a central pairing of Cesc Fabregas and Nemanja Matic, with Brazilian Oscar in a more advanced role, and has thus far made only minor moves in the summer transfer market.

Chelsea elected to bring in Radamel Falcao on loan from AS Monaco and have signed youngster Kenedy and Stoke City keeper Asmir Begovic.

The Blues eased to a Premier League title success in 2014/15 but Jose Mourinho is certainly not a manager who rests on his laurels and a move for a player of Witsel’s obvious quality could only boost the West London side’s push for Champions League honours.

Should Witsel move to Chelsea then he will join national team colleagues Thibaut Courtois and Eden Hazard as the club.