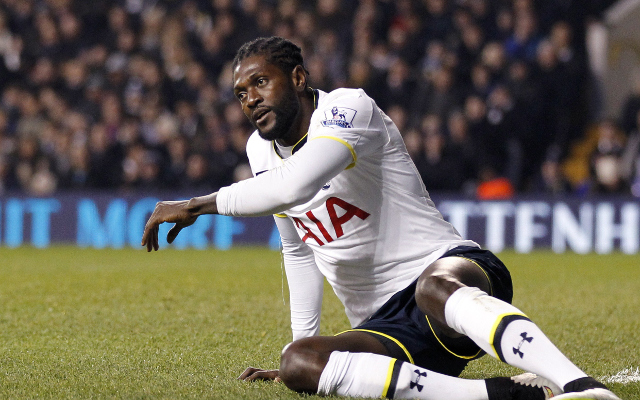 The Togolese striker is surplus to requirements at White Hart Lane after failing to break in manager Mauricio Pochettino’s plans for large parts of last season and it appears the club are desperate to get him off the wage bill this summer despite the player only having one more year left to run on his current deal.

According to Telegraph Sport, Villa are reportedly one of many teams that have shown an interest in the former Arsenal striker, as Tim Sherwood looks to persuade Adebayor that a move to Birmingham is beneficial for his career.

Staying in the capital is understood to be 31-year-old’s preferred choice and that would place West Ham United as potential favourites for his signature as they were close to a loan deal during the January transfer window. However, Spurs owner Daniel Levy pulled the plug on that transfer at the last minute [via BBC Sport].

Adebayor remained in North London but only featured in two matches towards the end of the season and is being lined-up by Villa as a potential replacement for Christian Benteke, who looks set to join Liverpool in the coming days after his £32.5 million buy-out clause was activated over the weekend [via Guardian Sport].

The Belgian powerhouse, who scored against the Reds in last season’s FA Cup semi-final at Wembley, was due to have a medical with the club on Monday [via BBC Sport] and is expected to become manager Brendan Rodgers’s seventh signing of the summer transfer window.

After seeing his side struggle for goals last season following the departure of Luis Suarez to Barcelona in the summer of 2014 and the various injuries suffered by Daniel Sturridge throughout the campaign, Rodgers has set about rectifying his offensive deficiencies. Roberto Firmino and Danny Ings have already been brought in to provide extra goal threats.