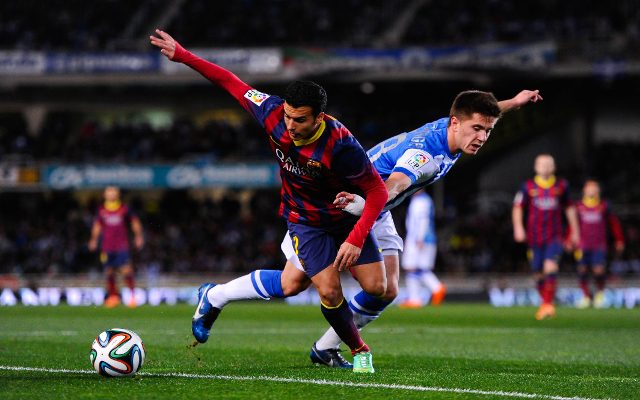 Man United are set to offer £18m for Barcelona attacker Pedro as the Old Trafford side look to replace Angel Di Maria according to the Daily Mirror.

The 27-year-old Nou Camp star has found it hard to retain a spot in Luis Enrique’s first-team and is now a target for Old Trafford boss Louis van Gaal.

Arsenal have previously been linked with a move for Pedro [via the Daily Telegraph] but the Daily Mirror claim Pedro is keen on moving to Man United this summer.

Pedro made just 15 La Liga starts in 2014/15, with Enrique opting to primarily use Lionel Messi, Luis Suarez and Neymar in a mouthwatering attacking formation. The Tenerife born forward has since seen his side sign Arda Turan from Atletico Madrid.

Louis van Gaal has brought in four top talents this summer as he looks to strengthen his squad ahead of the new campaign.

Memphis Depay was signed early in the summer, whilst Matteo Darmian, Bastian Schweinsteiger and Morgan Schneiderlin all signed in July.

Having secured a return to the Champions League following a couple of seasons out of the competition, experienced Dutch manager van Gaal will hope his improved squad can mount a genuine title push in 2015/16.

Van Gaal finds himself short on attacking options following the sales of Nani and Robin van Persie to Fenerbahce, coupled with his decision to not sign loaned-in forward Radamel Falcao [via The Guardian], and Pedro would offer him a fresh option in the final third.

Pedro can play effectively either on the flanks or in a central striking role, and is a hugely experienced campaigner who has won a host of honours during his time at Barcelona.

The Barcelona star has bagged 98 goals in just over 300 appearances for the Catalan giants, one of which came against Man United in the 2011 Champions League final.