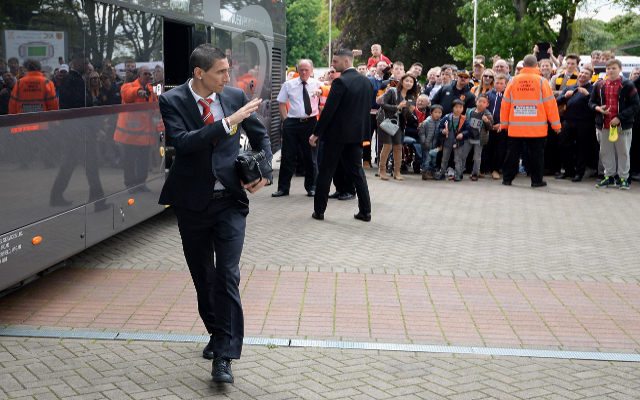 Manchester United are set to complete a deal for Barcelona star Pedro ahead of Chelsea, Liverpool, and Arsenal, reports the Daily Star.

The Red Devils are set to make a £18-20m bid for the forward, but it is unknown whether this will be enough to tempt the Blaugranas in to selling one of their long-standing first team members. However, a deal is possible according to the Star.

Last season the 27-year-old found himself out of the team for much of the campaign, with Neymar, Lionel Messi, and Luis Suarez all being ahead of him in the pecking order. The recent signing of Arda Turan means that the player could have now slipped even further, even though the Turkey international can’t play for the Catalan side until the end of their FIFA-imposed transfer ban in January.

Even with this, manager Luis Enrique wants to keep the winger, and is urging him to stay at the Nou Camp.

“I do not want him to go, but there is a clause and if he wants to go,” he said, “I hope that the relationship will not break, but I respect his decision. [Marc] Bartra is in a similar situation and he stayed.”

The Spain international could be a perfect replacement for Angel Di Maria who has been heavily linked with PSG [talkSPORT]. The Barcelona man can play on both wings like the Argentina international, and has the experience of winning the biggest competitions in the world in the Champions League and the World Cup during a glittering career for club and country.

Were the Spaniard to sign for Louis van Gaal’s side then he would be their fifth arrival of the summer, after Memphis Depay, Matteo Darmian, Bastian Schweinsteiger, and Morgan Schneiderlin, in a repeat of the big spending shown by manager Louis van Gaal in his first season at Old Trafford.