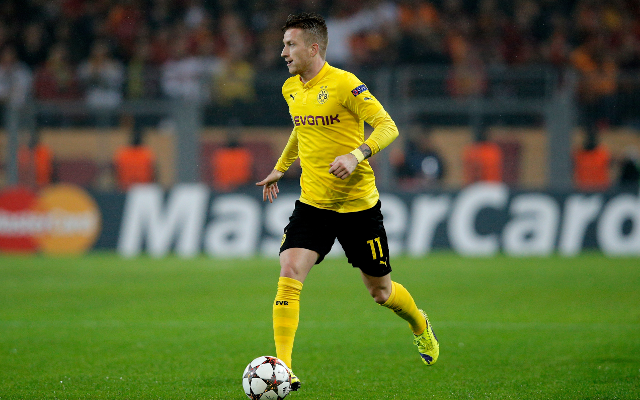 Real Madrid have started negotiations with Borussia Dortmund over the future of Marco Reus, reports the Daily Express.

This will be disappointing news for Barcelona, Manchester United, Arsenal, and Liverpool, who are all meant to be interested in the 26-year-old according to the tabloid. The Reds may be especially disappointed to miss out on the German, with the loss of Raheem Sterling meaning that a new forward could be vital to their hopes next season.

Reus is one of the best talents in Europe, having managed 53 goals in 119 appearances for BVB, mostly from the wing.

He has also netted nine times in 25 matches for Germany, although sadly missed their World Cup win through injury. These stats have earned the former Borussia Moenchengladbach man a £46 million asking price according to the Express.

However, it may be difficult for Real or any of his other suitors to prise the talented forward away from the Westfalenstadion.

He signed a new four-year deal with the Bundesliga outfit last February, which doesn’t have a release clause [Daily Mirror]. This means the club can refuse to sell the player if they want, and with CEO Hans-Joachim Watzke stating his ambition for Reus to emulate Steven Gerrard and remain with the team for a considerable amount of time, they could refuse any offers.

Los Blancos may be extra keen to sign the German after it emerged that David De Gea looked likely to be staying at Manchester United [Daily Mail].

Real president Florentino Perez loves high-profile signings, and it may be that Reus-and not the Manchester United keeper-represents the latest chapter of the much lamented Galacticos policy [Sky Sports].