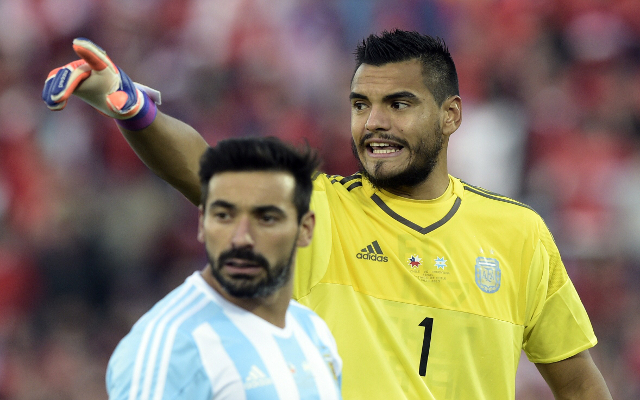 Old Trafford side look to bring in free agent keeper.

Manchester United are edging closer to completing the free transfer signing of keeper Sergio Romero, according to The Guardian.

The 28-year-old is the first-choice starter in the Argentine national team set-up and is a free agent after leaving Sampdoria earlier this summer.

United look set to keep hold of Real Madrid target David De Gea [via the Daily Mail] and The Guardian state Romero is being considered as a potential replacement for Victor Valdes, who has now been made available by the Old Trafford side.

Romero had an up-and-down time of it in Italy, helping Sampdoria to promotion from Serie B in 2012, and also spent time out on loan at AS Monaco.

The guardsman has demonstrated his ability between the sticks for both club and country, and his 62 national team caps attest to that fact; the former AZ Alkmaar man being key to his side’s runs to both the 2014 World Cup and 2015 Copa America finals.

Liverpool have previously been linked with a move for Romero [via the Daily Star], although The Guardian claim he is ‘inching’ towards a move to Old Trafford.

Should Romero sign, he would be the fifth capture of the summer, with Louis van Gaal having already signed Memphis Depay, Matteo Darmian, Morgan Schneiderlin and Bastian Schweinsteiger so far during this transfer window.

Last term, David De Gea acted as a vital last line of defence, proving to be especially crucial given that Man United’s central defenders proved inconsistent in 2014/15. Louis van Gaal would do well to tie-down the Spaniard to a new contract, with the 24-year-old’s current contract expiring in 12 months’ time [via Sky Sports].