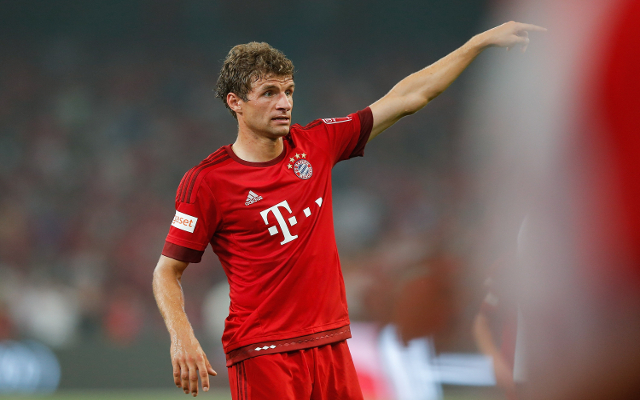 The 25-year-old German international is a player Old Trafford boss Louis van Gaal knows well from his time in charge of Bundesliga side Bayern Munich and an experienced forward who has won just about every honour available to him for both club and country.

Sport 1 claim Man United’s offer is to the tune of €100m (£69m), a fee that exceeds the British record £59.7m sum that the Premier League side paid for Angel di Maria last summer.

Louis van Gaal sold Robin van Persie to Fenerbahce earlier this month and is need of a replacement to spearhead his Man United attack.

Muller is chiefly used in a wide-attacking role under Pep Guardiola, with Robert Lewandowski being Bayern Munich’s first-choice centre-forward, though the lanky forward can also effectively fill the role leading the line.

Man United have been strongly linked with moves to sign PSG forward Edinson Cavani (via the Daily Star), though some reports suggest that deal is said to hinge on the French side’s interest in Angel di Maria (via the Daily Express).

Bayern Munich have already seen midfield general Bastian Schweinsteiger leave the club to join Man United and are said to have agreed a deal to bring in Juventus playmaker Arturo Vidal as his replacement (via the Guardian).

Van Gaal offered Muller a strong run in the first team set-up early in the star performer’s career, the star performer playing a key role in Bayern Munich’s double winning side in 2009/10 under the Dutch manager.

Muller has made over 300 appearances for Bayern Munich, scoring 121 goals in the process, and helping the German giants to four Bundesliga titles, three DFB Pokal crowns and a Champions League triumph in 2013.