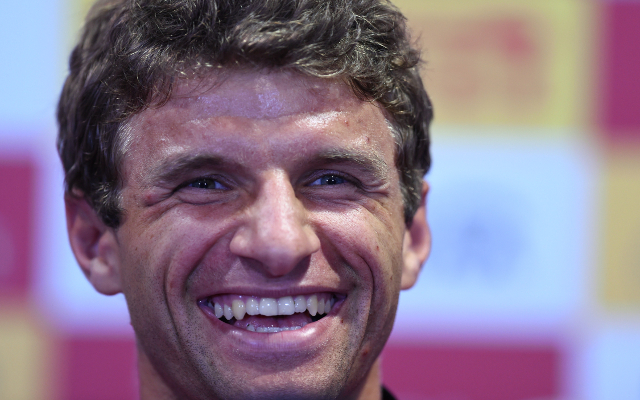 Though Bundesliga giants Bayern Munich wish to keep hold of World Cup winning forward Thomas Muller, the Allianz Arena star is open to a move to Man United according to the Guardian.

Muller has been a hugely pivotal member of Bayern Munich’s first team set-up for six seasons, having been given his first chance to shine by former boss Louis van Gaal, and Pep Guardiola will be more than aware just how crucial a member of his squad the German international is.

The lanky attacker has scored 121 goals in 304 appearances for Bayern Munich and has 63 caps to his name and this is no mean feat for a player who is still just 25.

Louis van Gaal finds himself without many central striking options, with Robin van Persie having been sold to Fenerbahce, and it’s a role Muller can effectively fill as well as being perhaps best used in a role on either flank.

Louis van Gaal is ready to use Wayne Rooney as a spearhead for his Old Trafford attack (via the BBC) though the England international was primarily used in a withdrawn role last season.

Muller’s versatility has made him a feared attacker across Europe and his tally of 20 goals across the past three Champions League campaigns is perhaps evidence of just how strong a weapon the Bayern Munich man has become at the highest level.

The Guardian claim that Man United are ready to offer Muller a massive £265k a week contract, twice is currently salary, but having only penned a new five-year Bayern Munich deal it’s clear the German giants have no intention of selling.

Man United have already lured Bastian Schweinsteiger from Bayern Munich and to secure a second star from the Bavarian side would be quite a coup.

Louis van Gaal’s side are hopeful an offer of £55.7m would be sufficient to tempt Bayern Munich into selling (via the Guardian).