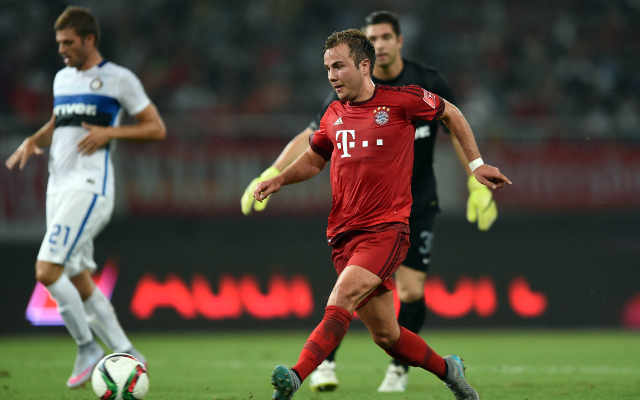 Bayern Munich attacking midfielder Mario Gotze demonstrated why he is currently a reported transfer target for several top European clubs with yet another winning goal as the Bavarian giants beat Inter Milan in a pre-season friendly.

The German international, who scored the only goal of the game against Argentina in last summer’s World Cup final, repeated the trick in a pre-season friendly for the reigning Bundesliga champions against the Serie A heavyweights on Tuesday afternoon.

Munich dominated the majority of the game against their Italian counterparts in the game, which was played in Shanghai, and had to wait until the 80th minute to take a deserved lead, as Gotze received a fine pass from Sebastian Rode, before keeping his composure and rounding Inter goalkeeper Juan Pablo Carrizo, before slotting the ball into an empty net.

Rode’s pass was a thing of beauty, although Gotze still had an awful lot to do, despite breaking the offside trap, and deserves immense credit for keeping his cool in the face of the onrushing Argentine stopper.

Gotze did begin the game among the subtistutes in a week that has seen him heavily linked with an exit from the Allianz Arena during the current transfer window.

Serie A giants Juventus are thought to be among the frontrunners to sign the 23-year-old [via ESPN] as they look to replace Chilean midfielder Arturo Vidal, who is set to join Gotze in Germany after the two clubs agreed on a £28 million fee for the Chile international’s services [via Guardian Sport].

Meanwhile, Barclays Premier League duo Arsenal and Manchester United are said to be watching developments closely [via Star Sport] as both are looking to strengthen their respective squads ahead of the coming season.