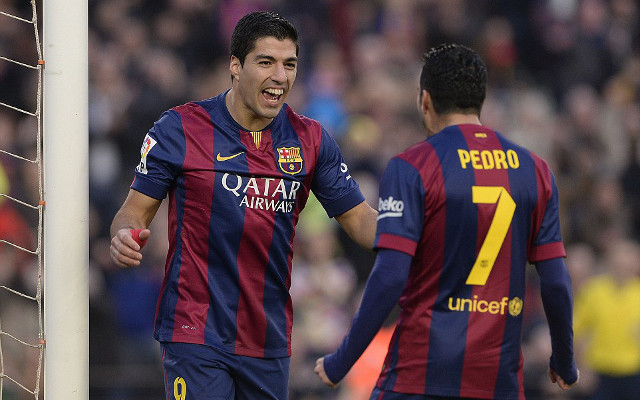 Barcelona’s Luis Suarez is eager for Pedro Rodriguez to reject a Camp Nou exit this summer.

The Spaniard has been heavily linked with Premier League quartet Arsenal, Chelsea, Liverpool and Manchester United over the past few weeks – with the English rivals all said to be prepared to meet his £22m release-clause, according to the Express.

His Barca team-mate Luis Suarez, while revealing that Pedro may move on this summer, has however urged the winger to spurn interest from England’s top flight:

“He’s had many years at the club, he has won many titles and his decision will be respected.

“But as a team-mate, obviously, I want Pedro to stay because of the importance that he has on a group level.”

It was claimed [via the Express] that Pedro’s future at the Camp Nou would be decided by the La Liga BBVA giants’ new president, and with the election having been concluded and Josep Bartomeu having sealed the title, as reported by The Guardian, the winger could now be one step closer to leaving Luis Enrique’s side.

The most recent report on the Spain international’s Barca career comes from El Confidencial, as they claim that the Red Devils are leading the chase for his signature and that negotiations are currently underway.

United manager van Gaal recently revealed that the club are locked in talks with a striker that the media are yet to have picked up on:

“A surprise? Yes. He’s in the process,” as quoted by the Metro.

“It’s not the striker that the media has written.”

As stated by the Metro, it was believed that Pedro may have been the forward at the centre of van Gaal’s mysterious comments; however, it remains to be seen who the former Netherlands manager could be referring to.